There are a lot of things that could have gone wrong with a movie like The Help. It could have gone overboard with the message of sisterhood and empowerment (like I feared when I first watched the trailer). It also could have put too much emphasis on the '60s setting while ignoring the darker themes of Kathryn Stockett's best-selling novel, but thanks to a script that stays loyal to the source material and moving performances, The Help is an insightful and inspiring look at society in 1960s Mississippi. 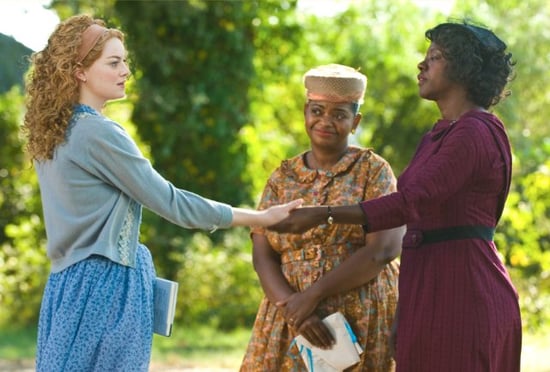 The film tackles two very different aspects of the community of Jackson: the lives of wealthy young Southern women, and that of their devoted maids. Hilly Holbrook (Bryce Dallas Howard) represents the worst kind of Southern belle: snotty, entitled and prejudiced, she believes that the African-American women who have raised her and helped run her households should be thankful and kept at bay — and in their own bathrooms, where white people won't be in danger of catching their "diseases." Her best friend Skeeter (Emma Stone) doesn't agree with Hilly's crusade against the help, especially since she holds her own former maid near and dear to her heart.

When Skeeter defies a life of bridge playing and gossiping in favour of pursuing a career in journalism, the rift between her and Hilly begins to tear. As Hilly continues to push forward her "bill" to force all maids to have separate bathrooms, Skeeter is inspired to write her first book from the perspective of the very maids that Hilly turns her nose up at. Skeeter enlists the help of Aibileen (Viola Davis), a kind and gentle woman who works for a friend, and Minny (Octavia Spencer), a sassy, no-nonsense maid whom Hilly fires in the first act.

To see why The Help works so well as a film, just read more.

What really makes The Help a compelling film are the top-notch performances from its cast. Emma Stone proves that she can handle a drama, but she's far outshined by the league of women supporting her. Davis and Spencer are perfect as Aibileen and Minny; Davis gives the kind of performance that breaks your heart and inspires you at the same time, while Spencer complements Minny's essential sass with just enough vulnerability to make her funny and authentic.

The woman who play Skeeter's peers are also excellent here. Howard delivers a deliciously sinister performance that makes Hilly's downfall all the more entertaining. Jessica Chastain (who is having a breakout season thanks to this film and The Tree of Life) also delivers as Celia Foote, a woman who's desperate to be part of the Jackson community but has been unfairly exiled by Hilly. In the wrong hands, these women could have been depicted as simple stereotypes, but each actress brings the depth and layers necessary to make the film feel realistic.

Director Tate Taylor takes plenty of time to let his story unfold, as each woman's life is examined separately and as a whole, and the film is well-served by its run time (though it does drag a bit in the end). It's easy to connect to these women — even Hilly — which is why the film is an effective new look at issues we're accustomed with. The Help is not just a portrayal of racism and segregation so much as a tale about the relationships between women who were all living together in Jackson in the 1960s. Not all of them were cordial, but not all of them were abusive either; one of the most crucial elements is that friendships did exist between the help and their employers. Ultimately, The Help is like a little bit of a food for your soul — though it may not go down easy, it's rich and fulfilling.

Pop Quiz
How Well Do You Remember Superbad? Test Your Knowledge With This Quiz
by Amanda Prahl 16 hours ago