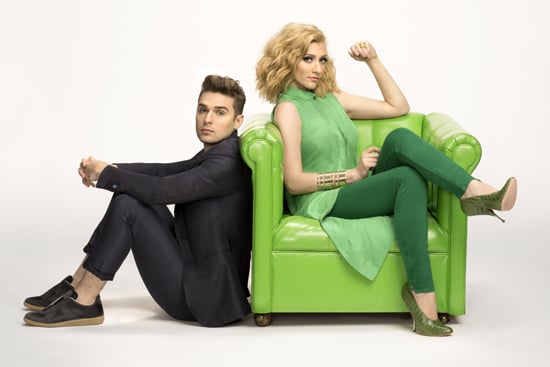 YouTube has dramatically changed the music landscape — it’s even launching its first ever music awards this year — and heaps of acts have been signed to major music labels after growing strong audiences on their channels. One of those acts is Karmin, couple Amy Heidemann and Nick Noonan who gained fans with their YouTube covers, particularly of Chris Brown’s “Look At Me Now,” which has more than 85 million views. Since being signed, they’ve released their own catchy singles, “Brokenhearted” and “Acapella,” and are putting the finishing touches on their album Pulses. We caught up with Karmin when they were in Sydney last week to talk about balancing music and personal life as a couple, what they think of covers of their own songs, and whether they would have ever auditioned for a talent show — turns out they were two days away from entering The X Factor!

Welcome back to Australia. What was your favourite memory of being here last time?
Amy: Oh my gosh. Well we found out that this was our favourite place to visit, first of all, which is pretty cool because we visit a lot of places.
Nick: There were a couple of things that stood out. Definitely just seeing the Harbour and everything, seeing the Opera House and the Zoo.
Amy: Being able to meet a kangaroo was really cool.

What have you been up to in the past year?
Amy: We recorded an album called Pulses, which is yet to be released, and we are putting the final touches on it, which could mean anything from mastering to writing additional songs. It’s like never finished, you know?
Nick: We’re hoping to figure that out and put that out as soon as possible.
Amy: We also got our first spot, our first little place to live in Los Angeles. We have a home.
Nick: Yes, we bought a house. We did our first actual tour this Summer —
Amy: With the Jonas Brothers. Which was really fun.

More from Nick and Amy when you keep reading.

How much do you get to be at home? Have you finished furnishing or is it still in the works because you’re travelling so much?
Nick: It’s mostly done now, but it’s still in the works. It’s habitable now.
Amy: When we got there, we were coming from a one bedroom apartment. We owned maybe a bed and beanbag chair. Now it’s much better.

How did you come up with the name Karmin?
Amy: It was a process because we didn’t just want to be ‘Nick and Amy.’ We looked at a bunch of different language dictionary translators, and tried to find a word that sounded cool and meant something to us. So ‘carmen’ is Latin for song, and we’ve always been songwriters.
Nick: We took ‘carmen’ and ‘karma’ and put them together.

Amy, how and when did you learn to rap?
Amy: Rapping, I think, came to me when I was growing up in the mid-west, in Nebraska. I’m from a very Christian family so I wasn’t allowed to listen to a lot of rap. There were a lot of curse words and parental advisory stickers. But I did get a hold of Dr. Dre’s Chronic 2001 somehow in middle school, and I remember listening to that and thinking how I wanted to be part of that lifestyle; I didn’t know anything about it. So I was practise rapping in the shower, but it wouldn’t be until after we finished music school that I did it publicly. On YouTube.

As musicians who gained popularity by covering other people’s songs, what’s it like for you to see people cover your original songs now?
Nick: It’s awesome. It’s kind of come full circle. Except when the covers are too good, we’d be like, “Yo, man, cut the sh*t. That’s cute and everything, but take it down.” No, it’s cool. It’s really neat. Like when we did covers and did “Look At Me Now,” people were like, “It’s so much better than the original!” And we were like, “Yeah, OK. That’s really nice, but it’s not. That’s really nice.” It’s just a refreshing take on the song.
Amy: And it’s cool to have inspired someone to get out their guitar and perform our song. It’s really cool.

With your latest single “Acapella,” I read it was inspired by [the movie] Pitch Perfect.
Nick: It was, in part.

What was your favourite part of that movie?
Amy: Fat Amy.
Nick: The weird parts. The beginning I did not see coming, with the projectile vomit scene. At the beginning of the movie you’re like, ‘OK, it’s going to be one of those kinds of movies,’ and then blarrgh! Then it was like, ‘Alright, let’s see where this goes.’

Do you guys have any pre-show rituals?
Nick: We do. We have like a team prayer with the band and everyone, and then we say ‘yes’ 10 times. Seriously.

Everyone in unison?
Nick: No, just me and Amy. Then we do Jumping Jacks or push-ups just to get the blood flowing.
Amy: It’s a high energy show. We really wanted to bring our band to Australia this time and do shows, but we didn’t get a chance to. I also take a couple of shots of vodka.
Nick: A couple of bottles — I mean a couple of shots.

Things happened quite organically for you with your success on YouTube. Off the back of your performance on The X Factor, would you have ever considered a talent show route?
Nick: Yeah. We were two days away from auditioning for The X Factor, because it was the only show that took groups. We uploaded “Look At Me Now” on a Tuesday, and we were trying to figure out how to get down to New York to audition on a Thursday. But the video blew up before that. We told LA Reid that, who was a judge at the time, and he was like, “You should have come down anyway!” We were like, “No, LA.”

What are the best and worst things of experiencing something like this as a couple? Do you find it hard to switch off?
Nick: It can be, for sure. At first it wasn’t, and then after a while of doing it all the time it just kind of melds into one big thing. For us it’s hard to switch it off because we always want to be doing it. But after awhile it can burn you out, so for us it’s important to make sure we’re not doing Karmin all the time.

Do you have any holidays lined up where you can relax without commitments?
Nick: Ah, good one. We’re trying to.
Amy: We have, after this trip, we’re going to Bali for three days, and then Indonesia for a show we’re really excited about, because we’ve never been. We love our fans there, at least on Twitter. We’ll see how they are in person [laughs].

Are you surprised by where your biggest markets are? Which have been the most surprising?
Amy: The Philippines was — it’s such a big YouTube audience. But it’s understandable now.
Nick: It’s good that we have bigger markets like here, the US, the UK, Canada, things like that. But then there’s random pockets like Turkey, Fiji, Malaysia.
Amy: Malaysia was cool — they put us on the cover of Cosmo, or something. We found it on Twitter and asked them to mail us a copy.

I read that you guys had a resolution to get married in 2013. It’s now September . . .
Nick: We’re still working on that!
Amy: Why did we say that? Now we’re just going to fail. We really wanted to fit it in this year, but I think we knew a few months ago that it was going to be really tricky. It’s a lot of planning and we have a lot more friends than we used to have.
Nick: It’s kind of all that bullsh*t stuff. Like the wedding isn’t really for you, it’s more for everyone else. Amy: It’s like Brad and Angelina! They’re waiting for gays to get married. That’s kind of cool.

YouTube and the Internet are such big places and so many people have channels — what’s your advice for standing out and being noticed?
Amy: YouTube is the perfect platform if you’re in a small city and don’t have access to venues to play. We didn’t have enough money to tour at the time, which is why we did YouTube. But I would say consistency is number one. If you can post once a week, minimum, that’s really important.
Nick: Try to find out why people should be watching you. Why are you different? Why are you better? Why are you unique? Try to find, what we call, your ‘purple cow,’ something that makes you special.
Amy: And communicate with your audience. If you start getting fans, communicate with them. It’s really important to have that relationship.

Pop Culture of My Life

The movie I can re-watch all the time
Amy: Charlie and the Chocolate Factory.
Nick: Forrest Gump.

The book that changed my life
Amy: That’s tough. I’m reading one now that’s changing my entire perspective. It’s called How to Be Like Walt, it’s about Walt Disney.
Nick: I’m going to go with the last book I read as well — the Steve Jobs biography.

My go-to karaoke song
Amy: “Don’t Stop Believin’.”
Nick: That would be it.

The person who inspired me to do what I’m doing
Nick: A combination — Kanye West and Dr. Dre.
Amy: For both of us.

The movie that always makes me cry
Amy: The Notebook.
Nick: The end of the third Lord of the Rings.

The song that makes me get up and dance
Amy and Nick: “Drop It Like It’s Hot.”

My favourite TV show from my childhood
Amy: My Little Pony.
Nick: The Drew Carey Show.

Celebrity Interviews
How True to Life Is the Trial of the Chicago 7 Script? For Yahya Abdul-Mateen II, Very
by Kelsey Garcia 17 hours ago

Skin Care
Kristen Bell is a Low-Key Skin and Nail Expert — and Her Salon Name? "There Will Be Blood"
by Kelsey Castañon 17 hours ago

Music
A TikTok User Made a Harry Styles x Britney Spears Song Mashup, and It's a Freakin' Bop
by Chanel Vargas 17 hours ago

Music
Miley Cyrus Is Making a Metallica Cover Album, and We're Ready For Her Version of Heavy Metal
by Grayson Gilcrease 18 hours ago