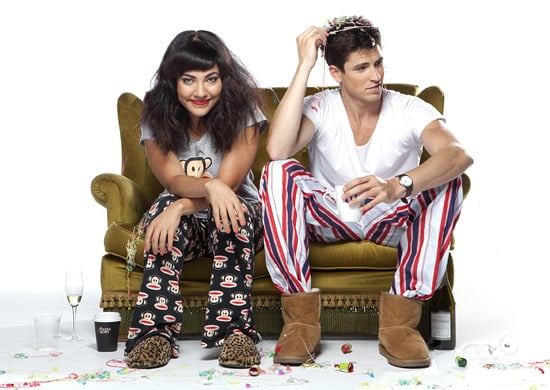 New music show The Loop airs on Saturday mornings on Eleven, bringing you the top 20 downloaded songs of the week as well as fun extras like new tunes, Aussie up-and-comers and celebrity Twitter pictures. Bringing you the entertainment are hosts Scott Tweedie and Ash London, who was discovered after Eleven held a nationwide search for Scott’s partner in crime. We visited the set last week and hung out with the music lovers to chat about bands they’re loving, Ash’s audition, and perks of the gig.

How much preparation goes into each show?
Ash: About a month for every episode? [Laughs]
Scott: Three days? It depends. It never ends in terms of being on top of your music, going to concerts, going to festivals, sourcing stuff out. At the moment Ash is doing more office hours than I am ’cos I’ve got a few other commitments. It’s sort of never ending if you put it on a timeline.
Ash: Scott spends most of his prep time in hair, makeup and wardrobe, making sure he looks pretty. [Laughs]

More from Ash and Scott when you keep reading.

Do you do much filming off-site?
Ash: For now it’s been in the studio. To start with, I think we just want to keep it about the countdown, about the music, less of us and more of that, which I think is what people really care about watching. And then maybe down the track we’ll venture out of the studio.

Ash, what was your audition tape like?
Ash: I talked about my favourite band, which are Foster the People. And it’s funny ’cos during the audition process the song I was talking about was “Call It What You Want,” but I’d referenced “Pumped Up Kicks.” So it was five weeks of auditions and every time I’d hear it on the radio, which was every day, I’d get so nervous because I was like, ‘Oh that’s my song! What if I don’t get the job!’

Did you have any TV experience? You come across as very calm and confident on TV.
Ash: Thank you! Not really. I’ve done a lot of radio stuff, so I’m used to speaking. Now it’s just making sure my face doesn’t look stupid while I’m speaking.
Scott: Oh, it looks stupid.
Ash: [Laughs] We have the best crew. As you can see on set, there’s so much love.
Scott: It’s gotta be a fun vibe, otherwise what’s the point? And I think it translates on screen as well. Ash is a bucketful of fun and it’s all worked in really nicely. Now we’re just trying to get the show to where we want it to be and get people to join the journey with us every Saturday morning. And if they miss it then, we do it late on Saturday nights.

What else was the audition process like?
Ash: I sent in a video and then a couple of weeks later I got a call saying, “We’d love you to come up to Sydney.” Lucky for me I had already planned spending four weeks in Sydney over Christmas, so I came up and did an initial screen test, and Scott was there. He was very lovely and made me feel very relaxed. I was feeling confident, but it’s television and they can be after a certain look. Then a week later I was called back to do it again, and that was my first experience with autocue, which was a bit scary.

Do you get much input with the show and script?
Scott: It’s not just us, it’s a team, and it’s a team of what we like to think are the model audience, and what the audience would like. And we can hear what the audience is saying through Facebook and Twitter because they’re telling us what they want to hear.
Ash: Mainly just One Direction.
Scott: You can filter through that stuff! [Laughs]

What do you make of the whole One Direction phenomenon?
Ash: I work in radio as well and I remember about five months ago, one of the girls who runs our teen website said, “They’re called One Direction. They’re gonna be massive.” This girl started getting us all obsessed. And then I did a phone interview with Harry, and we didn’t even really know who they were back then. He was 17 and he was such a smooth operator. Then I heard the music and was like, ‘Uh-oh, I’m gone.’ [Laughs]
Scott: To be honest and fair to them, they’re actually not that annoying. They’re annoying because all the teenage girls like them, but when you look at them and what they do, and how they do it, they’re not the world’s worst boy band.
Ash: It’s good, catchy, hooky pop music!
Scott: I’m not saying that!

Did you guys click right away with each other?
Scott: That’s pretty much how it all came about. Ash is a dude, but an awesome dude. She knows her music so well, and she’s so easy to talk to and to share the screen with.
Ash: And we have gone out together outside of work. That’s what a real test is, when you actually wanna hang out with someone.

What’s it like watching yourself on TV?
Ash: It will always be weird as far as I’m concerned.
Scott: I’m a perfectionist so I’ll watch and just critique it straight away. ‘We could do that better, we could do that better . . .’ But the vibe of the show is in the right spot. It’s a lot more enjoyable than watching myself on Prank Patrol. [Laughs]
Ash: I’m used to hearing myself.
Scott: You’re proud of yourself in a way because TV isn’t always there, and it’s hard to get there, so when you are there you have to half-enjoy it.
Ash: And the second you complain about doing what we do, you’re an idiot.

What are the perks of the gig?
Scott: Meeting cool crew, meeting cool people . . . Music becomes your life a bit more. That’s definitely a perk. And it’s only going to get busier once I finish my other commitments and can devote a lot more time to becoming a musohead.
Ash: And sometimes you get to see Dr. Chris Brown at Network Ten — perk. I love him.

And what kind of music are you into at the moment?
Scott: I’m digging some Brissy bands that I think are awesome. They’re not on our charts yet. There’s a band called YesYou. Obviously Last Dinosaur. There’s another band Ash got me onto called Holland.
Ash: We saw Matt Corby last week and he was amazing live. [To Scott] You’re into Skrillex.
Scott: Only because I saw him at Future [Music Festival]. Future was great with The Wombats. And Swedish House Mafia — I’m not into dance music, but [at Future] they had the biggest sea of people I’ve ever seen. They entertained for two hours. It was crazy.

The Loop airs Saturday mornings at 9:30 a.m. on Eleven.

TV
Saved by the Bell: Stan Is Officially Bringing Us Back to Bayside High in November
by Mekishana Pierre 6 hours ago

TV
The Masked Singer USA: Meet All the Characters For Season 4
by Kelsie Gibson 9 hours ago

TV
The Masked Singer: Breaking Down All Our Theories About Who Are Behind the Masks
by Kelsie Gibson 9 hours ago

TV
The Vow: The Surprising Connection Between Catherine Oxenberg and the Royal Family
by Monica Sisavat 9 hours ago

TV
The Crown Finally Releases Photos of Emma Corrin as Princess Diana, and the Resemblance Is Uncanny
by Tori Crowther 10 hours ago

TV
Need a New Show to Binge? Our Top Apple TV+ Picks Will Do the Trick
by Julia Duda 1 day ago
Latest Celebrity
×