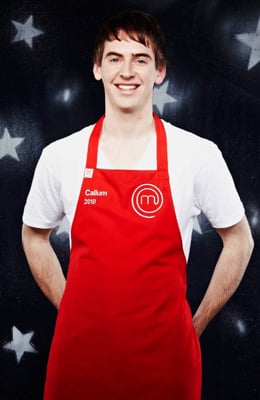 After three weeks of friendly competition, Callum Hann was crowned the winner of MasterChef All Stars last night. The 22-year-old from Adelaide won $20,000 for his chosen charity, Cancer Council, the first MasterChef trophy, and was given the opportunity of cooking Peter Gilmore’s infamous Snow Egg dessert, which he struggled with in the 2010 grand finale. Aside from being a great cook, Callum showed his super likable personality when he donated $10,000 to runner-up Chris Badenoch’s charity. We caught up with Callum to discuss whether he had an unfair advantage with the Snow Egg, social media, and why All Stars was so much fun.

Congratulations on your MasterChef All Stars win! How long have you known for? I heard you filmed two winner announcements?
Yeah, that’s true. We probably filmed it about two-three weeks ago. We filmed a version where the scores were revealed and I won, and a version where Chris won, as well. So I only found out officially yesterday afternoon.

I don’t really understand how this whole double endings thing works. You have to act really excited in one, then not as excited in another . . .
It’s really bizarre. Obviously we can all cook, but none of us are particularly good actors. [Laughs] It’s a bizarre way to film television but I guess it just means they can keep the secret as long as possible, rather than just doing one and risking it getting out on Twitter or Facebook.

This is the first series of MasterChef where the contestants have had a presence on social media during the show.
It’s usually so strict and you can’t have a Twitter or Facebook while you’re on the show. If you do have one, you have to shut it down.

More from Callum when you keep reading.

I think a lot of viewers thought it was nice to have the contestants on social media in real time, being able to explain things and just having that interactive element.
It gives people that insight into it, I think, like if they’ve got a question that they have to have answered, rather than just putting it out there in frustration, you can actually answer questions for people. It enriches the show. A lot of people I know who have Twitter or Facebook actually sit with their computer in front of the TV and watch the comment feed as it’s happening, that sort of thing. If they’re getting comments from Julie Goodwin, or Hayden [Quinn] or Marion [Grasby], or whoever it is when it’s happening, I think it enhances the viewing experience.

With the grand finale last night, were you surprised they brought back the Snow Egg? Did you think that maybe they could’ve just brought out another Peter Gilmore dessert you hadn’t done?
Yeah, it was really bizarre. The whole theme of the series has been revisiting things, like the croquembouche and sausage sizzle — things that had happened on the show that were significant moments, and I guess that’s why they did it. It was a very memorable dessert. At the same time, it seemed strange that I’d done it and Chris hadn’t obviously. It was certainly an advantage having done it before, but if you break the dessert down to its core elements — it’s a meringue, it’s an ice cream, it’s a custard, it’s a tuile biscuit — the actual elements Chris and I would’ve both done separately at any one time. I think my advantage was having put the whole thing together before and assembling it.

How was it second time around?
[Laughs] I’d never cooked with a jackfruit before — did you see the size of that fruit? I totally wanted to get one of them but they’re like $100 each, apparently, if you get the good ones, Peter Gilmore was saying. I don’t think I can just have one in my fruit bowl. [Laughs] Because I’d done it two years prior and hadn’t made it since, I was a little bit more rusty than I hoped I’d be. I didn’t do an amazing job the first time, so it was satisfying to be able to knock it out of the park the second time.

It seems like the two MasterChef grand finales this year had lots of tuile trouble.
I think by the time you get to the end of a MasterChef series, everyone’s quite a strong cook, and so they have to challenge us, which is why I think they bring out things like tempering chocolate and making tuile biscuits, because it’s the sort of thing things can go wrong with. Even Peter Gilmore was saying that he makes many more tuiles than he needs because they do break. You have to allow that. And it makes for great TV!

Do you have a favourite out of the two series you’ve done?
I loved them both for very different reasons. The first one changed my life, very much so — I changed obviously as a cook, but also as a person, because we were on the show filming for eight months, and it was a massive change for me. The second time it was so much fun coming back with everyone, and coming back not playing for ourselves but playing for a charity, was a really unique opportunity. It’s not every day you get to do something as simple as cooking and raise a bucket load of money for a charity of your choice.

Did you come into All Stars with a game plan or different approach?
You know what? I really didn’t. I didn’t come back trying to win the thing. I came back just to raise money and have a bit of fun, to be honest. I had no preconceived ideas that I’d do well. If you look at the people who were there, including two winners like Julie and Kate [Bracks], it would be a cocky person who would go in expecting to do well in that sort of situation. If anything my game plan was to have more fun because the first time was super-serious.

Did you all really move back into the house?
Yeah, we really did! It was quite funny actually. Some of the people I’ve lived with before, but others I’d met a handful of times but I’ve never spent a great deal of time with them. Watching someone like Kate on series three the whole way through, then going in to live with her, I kind of knew her but I kind of didn’t. It was strange. When you’re living in someone’s back pocket and filming for 10 hours a day, then in the house with them for the rest of the time, it’s pretty full-on, but I loved it.

Do you have any funny behind-the-scenes stories? Hayden said you tried to do a flash mob, but it failed.
We did try and do a flash mob and it failed terribly. Aaron [Harvie] and Chris were both so against the flash mob, because they’re not really the breaking-into-song-and-dance kind of guys. If everyone didn’t do it, it was never going to work. And it was hilarious being able to have a crack back at the judges. The first time you wouldn’t dare say anything, like, ‘Oh, I might get eliminated,’ but this time we were like, ‘Oh well, it’s not really about getting eliminated or not.’

What do you think about how the show has changed since you’ve been on it? You probably heard today that the show is moving to Melbourne.
I think it’s really exciting, a new start. And it’s the judges’ hometown — all three judges are from Melbourne. I think they’ll be relishing that change. And it probably means there’s a whole host of different types of challenges they can do, because the Melbourne food scene is so different from Sydney. I think it will re-energise the show. I think it’s a really positive move.

Who do you still keep in touch with from your series?
Quite a few of the people. I was speaking to Marion this morning. Adam got married in Tokyo recently, so we went and spent some time in Tokyo with him, which was awesome. I went with Marion and Matt. Obviously we’re all scattered across Australia so it just depends when I get to travel. It’s a good little bunch of friends.

And you’re mostly based in Adelaide?
Yep. So I’ve got my cooking school here in Adelaide, and I did all my book testing in Adelaide as well.