Michael C. Hall headed straight into the press room following his win for Best Actor at yesterday's SAG Awards for his role in Dexter. It's been a good week for Michael after also taking home a prize at last Monday's Golden Globes, and he answered a few questions about where he's storing his new statues and going public with his cancer fight. He said: 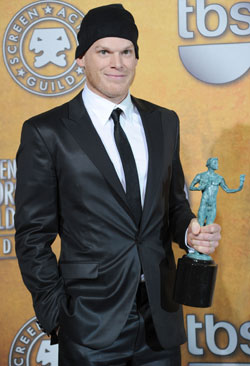