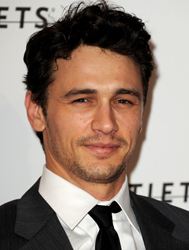 James Franco must have a thing for literary types: to follow up his portrayal of poet Allen Ginsberg in Howl, the actor has reportedly purchased the rights to Stephen Elliott's The Adderall Diaries: A Memoir of Moods, Masochism and Murder. The drug-addled tale gets inside the mind of author Elliot as he chronicles a strange murder trial and copes with his own substance abuse, depression, and childhood scars. Franco will be adapting, directing and starring in the lead role. Let it never be said that the guy isn't ambitious!