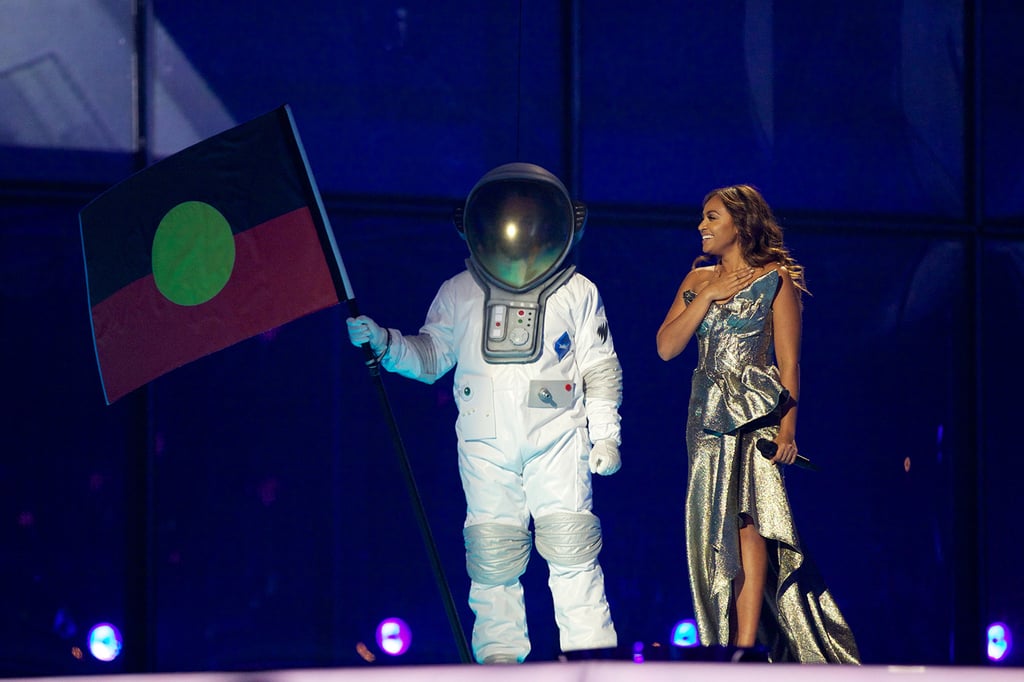 Jessica Mauboy has continued her world domination by performing at Eurovision, marking the first time Australia has been invited to perform at the annual song competition. Jessica didn't compete (the competition is only open to countries that are members of the European Broadcasting Union), instead performing as a guest during the second semi-final. Following a very Aussie introduction, Jessica, wearing a Toni Maticevski gown, sang an anthemic song she co-wrote called "Sea of Flags" in front of a crowd of 12,000, and it's estimated that 180 million people around the world tuned in for the broadcast. Prior to hitting the stage, Jessica met with Princess Mary and two of her children as the competition takes place in Copenhagen this year.

Watch Jessica's performance below, and for more of her experience tune into Jessica Mauboy's Road to Eurovision on Saturday at 7:30 p.m. on SBS.

Music
6 Times Nicole Richie, aka Nikki Fre$h, Proved She Was Born to Be a "Trap Star"
by Monica Sisavat 2 days ago

Music
Ariana Grande Sends "Virtual Love" to Fans With a Special, At-Home Performance of "My Everything"
by Kara Kia 3 days ago

Music
Cheers to Carrie Underwood, Who Effortlessly Belted Out "Drinking Alone" From Her Couch
by Kelsey Garcia 4 days ago

Music
Dear Ben Platt, Thank You For This Beautiful Cover of Robyn's "Dancing on My Own"
by Brea Cubit 4 days ago

Music
Staying Home Separately, This Boyfriend Comforted His Girlfriend With an Original Song
by Kelsey Garcia 6 days ago

Music
If You're in Need of a Little Cheer, Watch All of Sam Smith's At-Home Performances
by Monica Sisavat 3 days ago