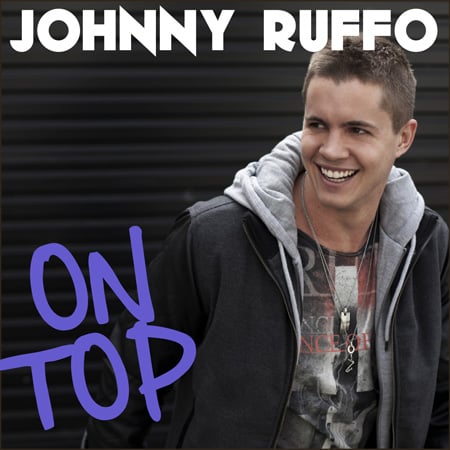 What a difference a year has made for Johnny Ruffo. The former concreter from Perth auditioned for The X Factor last year and made it to the top three, missing out on a top two spot behind Reece Mastin and Andrew Wishart. Now he has a recording contract with Sony Music and a shiny mirror ball trophy from winning Dancing With the Stars on Sunday night after months of ballroom dancing. His new single, “On Top,” has just been released, so we caught up with Johnny this morning to find out how he fits everything into his day and what we can expect from his upcoming album.

A year ago The X Factor hadn’t even started. You didn’t win, but it hasn’t hindered your rise since . . .
Being on The X Factor was a platform. It’s given me an opportunity and I’ve run with it. I’ve worked really, really hard and I’ve been lucky to make something out of it.

More from Johnny when you keep reading.

What were the best and hardest things about doing Dancing With the Stars?
The hardest thing was the rehearsals. We’d be rehearsing probably six, seven, eight hours a day sometimes, and you’d feel it. Your whole body would be aching sometimes. The best part about it was Sunday night. The performances were so much fun. Getting on stage and performing in front of a live audience was absolutely incredible. The people there are amazing as well — the other celebrities, the dancers, the crew, the cast. It was great to make some new friends.

Were you still able to do your own music while doing DWTS, or was it too hard to juggle everything?
I had to. My schedule throughout Dancing With the Stars was ridiculous — I toured with One Direction, I toured with NKOTB and Backstreet Boys. With those tours Luda [Kroitor, his dance partner] had to come with me on them because we still had to rehearse seven hours a day. She was flying to Perth with me, to Adelaide, to Brisbane — we had to rehearse, we didn’t have a choice. It was definitely a bit of a hard task but we managed to do it and it turned it out pretty good.

Was there ever a point where it felt like a bit too much?
During the NKOTB and Backstreet Boys tour it felt as though, like, “I don’t know if I can do this.” I just didn’t have the time. I had to rehearse for the tour, we had to fly around the country, plus we had to try and fit rehearsals in for Dancing With the Stars . . . Sometimes it felt like it was getting too much but I just kept fighting through it.

Do you have any funny stories from the DWTS after party?
[Laughs] There’s a few funny stories. It was good fun. A lot of people had their shirts off, mucking around, doing strip teases for a few of the ladies. It was funny.

Can you describe an average day for you?
I haven’t had a normal day in months! I guess a normal day for me would be to get up at 8 a.m., maybe even earlier at seven. Usually I start with interviews, like everyday I’ve got interviews, no matter what’s happening. Sometimes I have to get up earlier for breakfast radio. During the day I’m usually down at Sony in the studio doing some song writing. Usually we organise some co-writes with other artists and producers. That will sometimes run through to night. Sometimes I’ll do some co-hosting spots on radio at night, or interviews, and if I’m lucky enough I’ll actually get the night off!

When do you get time for yourself?
The thing is I still do dance rehearsals as well, I do vocal training. It’s so busy. There’s never really a day where I don’t do anything.

Did you write or co-write the song?
I did, I co-wrote the song with DNA and my MD Michael Tan. It definitely pushes the envelope lyrically — I’ve had great feedback and I’ve also had negative feedback, but that’s the way the industry is. You’re never gonna be able to please everyone. I just wanted to write a song people could sing along to because it’s got a catchy melody, and also when they hear it in a club they wanna get up and dance.

Is this the kind of sound we can expect from your album?
It’s definitely along the lines of this. The other songs aren’t exactly the same — I wanted to go with this one first because it’s a little generic, which eases people into what you’re doing. It’s not too left-of-centre so people are comfortable with the sounds used throughout the song. The next one is a little more challenging towards the commercial industry — it’s definitely a commercial track, a mix between JT and Maroon 5 I would say, so it’s got that mainstream side but it challenges the market, which is great. That’s what I wanna do. I want every song I bring out to be unique and have something different.