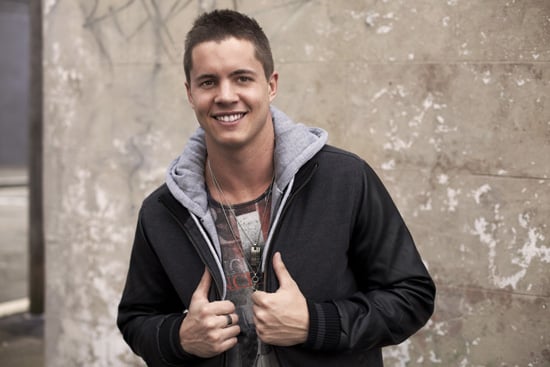 In the first part of our interview with Johnny Ruffo from yesterday morning, we covered his new single “On Top” and highlights from Dancing With the Stars, which he won on Sunday night. In the second part of our chat, we discussed what it was like to tour with One Direction (and who his favourite member is), girls and his celebrity crushes, and we got him up to speed with all the judging panel changes to the US version of The X Factor. Another thing we learnt: what he likes to do when he does get spare time.

What was your reaction to being asked to support One Direction in Australia?
When I was asked to do the tour for One Direction I was like, “I would love to do that. It would be an absolutely amazing experience.” The opportunity was so incredible. It was so surreal. Being able to tour with them was so fantastic because every time we do a support, 90 percent of the time not everybody in the audience knows who you are, and it’s a good chance for you to gain fans. Every time I do support I really try and put on the best show I can. And touring with One Direction was crazy because they have got some crazy fans! [Laughs]

What was it like to work with them?
Getting to know them was awesome. I was lucky to hang out with them quite a bit. I spent the most time with Niall — he’s definitely my favourite [laughs]. He’s just a really cool guy. We managed to have a couple of drinks together. We flew around a lot together, so Niall and I sat together for most of our flights. He’s a funny, good guy.

More from Johnny when you keep reading.

How are you handling all the extra attention on you?
It’s different. Obviously you get recognised a lot more, but it’s just part of the job. You do lose a lot of your own privacy. I knew this when I was a kid wanting to become a musician. I knew if I was ever to break into the industry that you do lose a lot of that. And I think you have to accept that. I understand it.

You have more than 115,000 Twitter followers and lots of them are girls with names along the lines of ‘Mrs. Johnny Ruffo.’ How are you dealing with that, all the attention from girls?
It’s good. To have fans like that is great and I really appreciate their support. They’re the ones who are gonna stick by, the ones who are loyal fans. They’ll support you through highs and lows. I always tweet back to them and I really engage in social media. I love talking to them.

Do you have a girlfriend at the moment?
I don’t. Unfortunately I don’t. I guess when I meet somebody right it’ll happen.

Do you have a celebrity crush?
Jessica Alba. She’s amazing.

What would you do if you met her?
You do not wanna know. Also — Demi Lovato. She’s hot.

And she’s an X Factor judge now. In the US.
Is she? Is she really?

Who do you want to collaborate with?
Justin Timberlake. Without a doubt. He’s just a musical genius. He’s incredible. Unbelievable.

He’s gone into the whole acting thing. Is that something you’d be interested in?
Yeah, definitely. I want to keep that on the cards but for the time being my main focus is music and getting an album out, doing a tour and all that. I love being on television. It’s just so much fun. The TV world is incredible. Every week you’re interacting with your fans because they’ve seen you and then they’ll get on social media and interact. You really feel as though you’re engaging with your fan base. It’s a good feeling. I definitely want to try and stay on TV somehow.

When is your album expected to come out?
I’m hoping that if everything goes to plan it’ll be November-December this year, somewhere around there. November is what I’m aiming for but obviously I want it to be right. I’m not going to rush it. If it gets to October and we’re still searching for a couple of tracks then I’d rather push it back and get it right.

When you do get free time, what do you like to do?
When I get spare time I love to go on eBay and buy random things. I’ve got this competition with my housemate where [laughs], it’s like a competition to see who can get the most packages delivered to our house. We buy little window squeegees and random stuff that doesn’t make sense.

What have you learnt about yourself over the past year?
I’ve learnt that I can take criticism very well [laughs], because I cop it all the time. It doesn’t bother me anymore. I’ve got a very thick skin when it comes to that. And I’ve learnt that I’m prepared to work as hard as I have to, to achieve my goals. I just love working. I’m a bit weird like that.

Don’t you ever want to just switch off?
I’ll sleep when I’m dead.