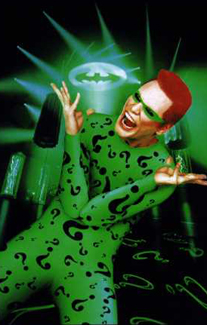 The Batman rumours continue to circle. The latest: The Riddler may appear in the follow-up to The Dark Knight and Joseph Gordon-Levitt's name is currently attached as "interested." We've heard rumblings of this before, but now that director Christopher Nolan is coming off a successful partnership with JGL in Inception, the gossip seems more probable than ever. I think Gordon-Levitt could be great for the part but the script reportedly calls for an actor between the ages of 35 to 45. If Nolan decides to stick with someone older, previously rumoured Johnny Depp could fit the bill, although he's a little over the cap at age 47. Anthony Michael Hall's name was also attached a while back, but that sounds unlikely. So riddle me this: who would you put in the villainous role? For me, the first guys that come to mind in that age range are Jude Law or Ewan McGregor. Perhaps one of them could step in, but do you have any casting suggestions?