The problem with Julia Morris is that you can never really get enough time with her. You know? She's one of those people. Infectious. Warm. Julia Morris is the kind of woman you want to take home — as in, the thought of leaving her elicits true sadness, and so you'll do just about anything to surgically attach yourself to her for the forseeable future. 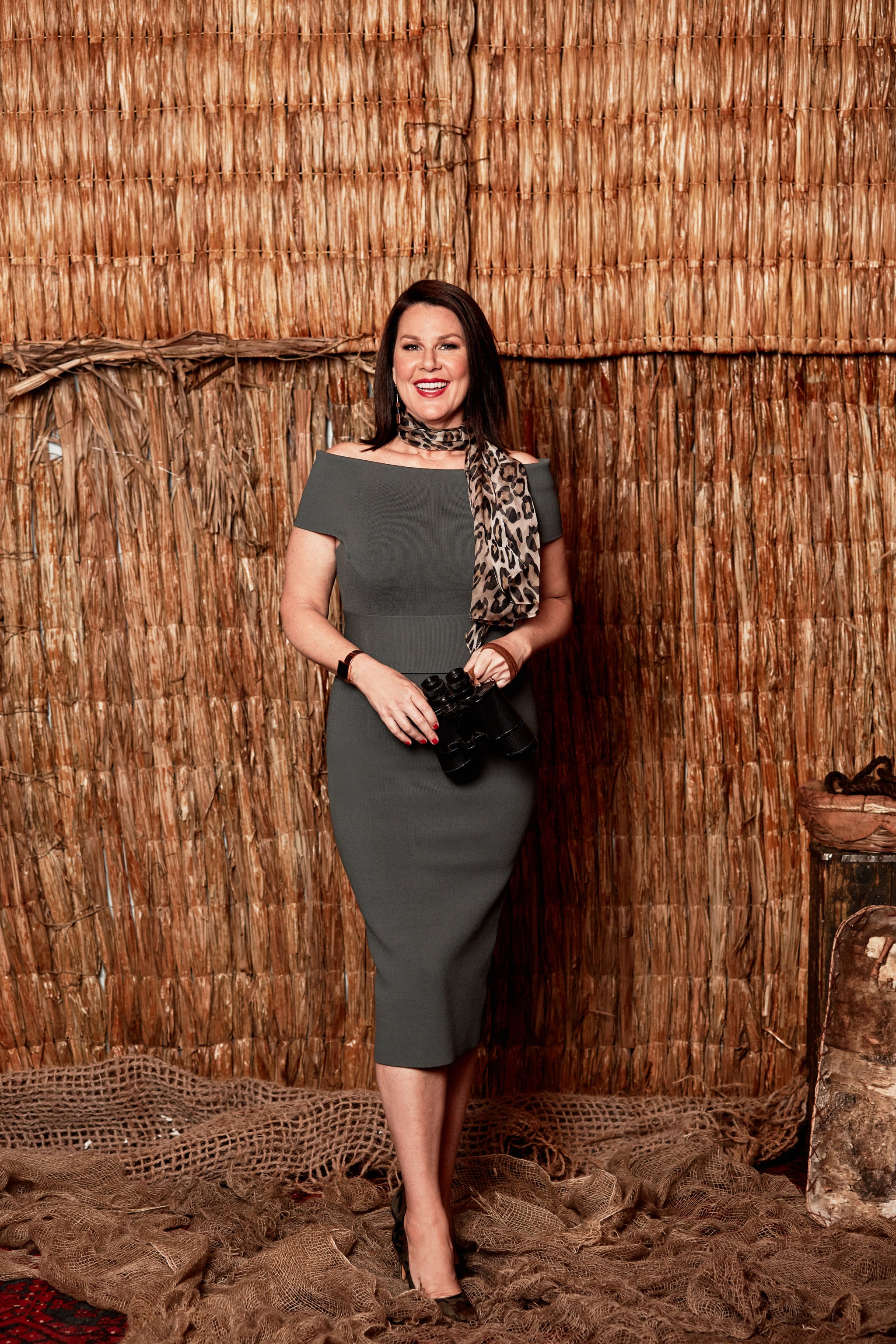 Of course, we all know that already. That's why she's one of Australian TV's most successful identities: she's the hostess with seriously the mostess on I'm a Celebrity . . . Get Me Out of Here! (and boasts a flair for twisting the English language), her stand-up comedy shows sell-out consistently, she's an integral part of the House Husband's line-up and she's heading up Blind Date, coming to Network Ten this year. She's wildly popular in our country's tight little industry, and it's never been easier to see why than when I walk into a small studio at Network Ten's HQ to interview her ahead of the launch of IAC's fourth season.

Related:
All Has Been Revealed! Here's Who's Going Into the Jungle

"Hello, darling!" she calls through the door, walking over to greet me with a kiss. We've met before, a couple of times, but considering she meets a thousands of new people a year (such is the nature of fame, eh?), it's charming that she's greeting me like an old friend. Though I get the distinct vibe that she's like this with everyone, not just someone who's interviewing her for her TV show.

"I didn't know how the year was going to roll out for the network. I got a bit sad, thinking, 'I haven't said goodbye to South Africa yet.'"

Before we take a seat on the couch, she grabs her phone and asks, "Can I show you something?" She pulls up a picture of a red dress and tells me, with levels of energy I can only dream of, that this is the dress she'll wear on launch night for I'm a Celebrity (it starts tonight!). She loves it. She can't wait to wear it! And so we launch into talk about the show — can she believe we're up to season four already? "Yes ma'am," she says. "Series four, and I am sure we are going to go for years and years — or maybe that's just how I want it in my heart. Early last year, I didn't know how the year was going to roll out for the network. I got a bit sad, thinking, 'I haven't said goodbye to South Africa yet;' I haven't said goodbye to [the show] yet." Network Ten had, at that stage, gone into voluntary adminisatration and the future of the business was in doubt.

"There was no way in million years that I would've thought we weren't going back. I just kept thinking — because I'm so confident about stuff anyway — I'm like of course it's going ahead." Turns out she was right: CBS bought Network Ten and it was basically business as usual for Julia and her colleagues from then onwards.

I ask Julia what she loves so much about working on the show for three months of the year — especially considering it's filmed in South Africa, away from her family — and she doesn't hesitate. "It was one of my favourite shows when I lived in the UK," she explains, "and I could not get enough of it. I love the idea of seeing people in what feels like pedestrian moments, but learning things about their morals and their standards."

"I would never have thought that Shane Warne was going to become one of my all-time favourite people."

When I tell her that's one of my favourite elements of the show — the fact that you get to see celebrities in completely confronting, challenging, unusual situations — she agrees. Prime example: hane Warne crying and shaking in fear as he faced his spider phobia in an episode last year — not exactly a moment in his life that we expected to be privy to.

"He's become one of my all-time favourite people," Julia says. "I would never have thought that Shane Warne was going to become one of all-time favourite people. I'm kind of like, 'All those sporty guys, whatever.' Then watching him care for and protect his fellow camp mates . . . and to really get an understanding of the difference between being scared and having a phobia, it was distressing to watch. He didn't have to hold it but went [on the show] wanting to make his children proud and he did it."

We move away from the show and onto other things — you see, it's a big year for Julia. She's turning 50 in April and you bet she's embracing it. "I thought that 40 was the big turning point," she tells me. "Now I think it's 50. I think 40 is the decade to get used to the fact that you're going to age, 'cause it's the first time you kind of do. You're like, 'Oh my god, look at that in that photo.' It's the first time that sort of thing happens. You've got 10 years to get used to it and now that I am turning 50, I could care less. Like, whatever mate."

"I mean, I'll no sooner go jogging than fly to the moon. It's simply never going to happen."

It's a refreshing headspace for Julia to be in. "I still look after myself, but I can only do what I can do each day," she says. "I can't now spend the second half of my life being upset — no, upset is not the right word . . . but being dissatisfied with the way I look. I've got no time for it now. I think I've been every different size. I've embraced every different size. I've spoken on behalf of every different size over the years. As long as you're healthy, it doesn't matter. I mean, I'll no sooner go jogging than fly to moon. It's simply never going to happen. Jogging and I will never be friends. I've got no business with it."

"The second [a diet] starts, I'm like, 'If I don't get a vanilla slice today, I don't even know what to do with myself.'"

Same goes for diets. "I work out ways to fit in increasing my heart fitness, but I've not been on a diet since my probably late 20s. I think diets are bad news. Oh my god, they make you feel so bad! There's no point. The second it starts, I'm like, 'If I don't get a vanilla slice today, I don't even know what to do with myself.'"

Her solid handle on the things that truly matter in life — like eating the damn vanilla slice — is probably partly responsible for her success, in all areas. She works hard, she loves her family hard and she lives her life how she wants to. "I have always been this busy, just not as in the spotlight," she says when I ask if she's enjoying this hectic run of work. "I think that sometimes in Australia my career looks like it took a dip. But I just wasn't here." Instead, Julia was living and working in London for eight years. "In actual fact, I feel like I have been on an upward trajectory, and even though it was what I was working towards, I didn't necessarily expect that it would happen. Because, there are how many slots on the television? There aren't that many spaces for people, so it's pretty exciting to still be here."

Something else that's not lost on her is how the industry — and society in general — has changed for women. "Now you're allowed to have a voice. Women haven't really been allowed to have a proper voice. I hate to bring it to another 'what women weren't allowed to have' thing but . . . " She trails off. "It's true?" I ask. "Yeah! Like wah, wah, wah, my wife's nagging me at home. What? Is it 1940? I watched a movie the other night, and the dad was saying, 'Oh I've got to babysit the kids tonight.' No, you don't have to 'babysit' the kids tonight. What you have to do is parent!"

See, Julia knows what's up. When I'd asked her how she was at the beginning of our chat, she responded, "Well, I woke up alive. You know, you're off to the right start, when you wake up alive. It's just like, 'I can do anything today. I've already done the hardest bit — I woke up.'" Preach it, sister.

Image Source: Network Ten
Join the conversation
TVReality TV InterviewsJulia MorrisReality TVI'm A Celebrity Get Me Out Of Here
More from POPSUGAR
From Our Partners
Related Posts

TV
Netflix Knows You Love Virgin River, and Season 2 Finally Has a Release Date
by Amanda Prahl 24 minutes ago