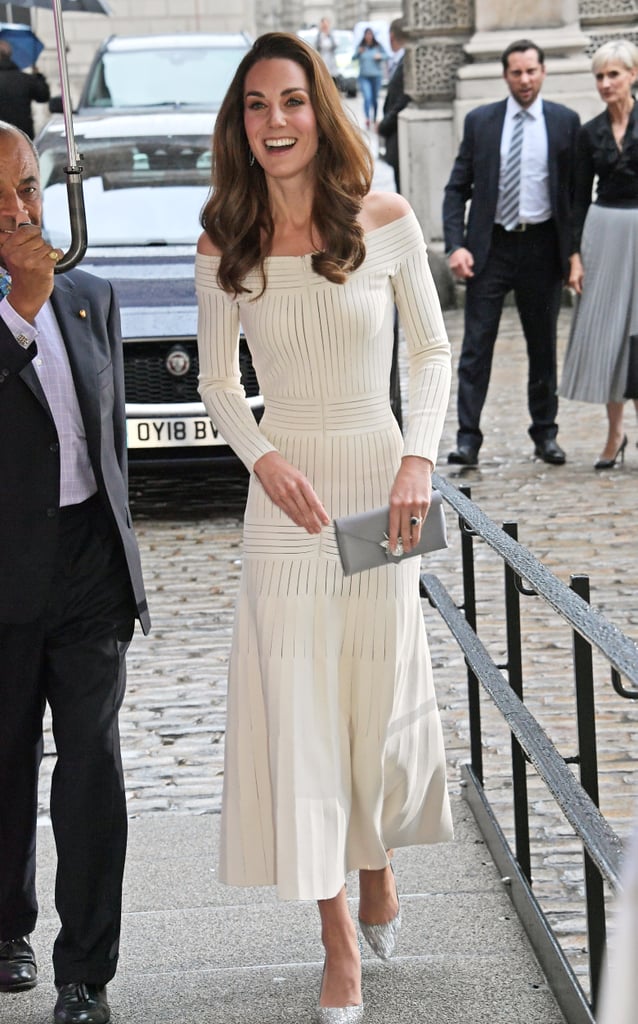 Kate Middleton looked positively radiant when she stepped out for the first Action on Addiction gala dinner in London on Wednesday evening. Clad in a white, off-the-shoulder Barbara Casasola dress (which she previously wore to a Natural History Museum event in 2016), the Duchess of Cambridge — who is a patron of the charity, which helps both individuals and families affected by drugs and alcohol — was there to mark Addiction Awareness Week and meet with people and families who have dealt with addiction.

"Action on Addiction was one of my very first patronages, and as such, it is very close to my heart. I'm hugely passionate about the support it provides, especially for parents, children, and families who suffer from, or through, addiction," Kate said in her speech. "Having met so many people who've suffered from addiction, I have seen over and over again that, sadly, the root cause can so often be traced right back to the very earliest years of someone's life. Trauma experienced in early childhood, in some cases, as a result of separation, abandonment, abuse, or even emotional neglect, can have a lasting effect."

Action on Addiction was actually one of the first charities Kate became involved with when she tied the knot with Prince William in April 2011 and became a royal. "What's remarkable about Action on Addiction is that it goes beyond helping those who are suffering on the courageous journey into recovery — it also lends direct support to the children and families affected by addiction for as long as it takes," Kate continued. "There was never a more important time for Action on Addiction to succeed. And I, for one, could not be more delighted to support such a special organisation."

Related:
Who Has the Best Handwriting in the British Royal Family? We'll Let You Decide
0
previous images
1
more images
Previous Next Start Slideshow
Join the conversation
The RoyalsThe British RoyalsKate Middleton
More from POPSUGAR
From Our Partners
Related Posts