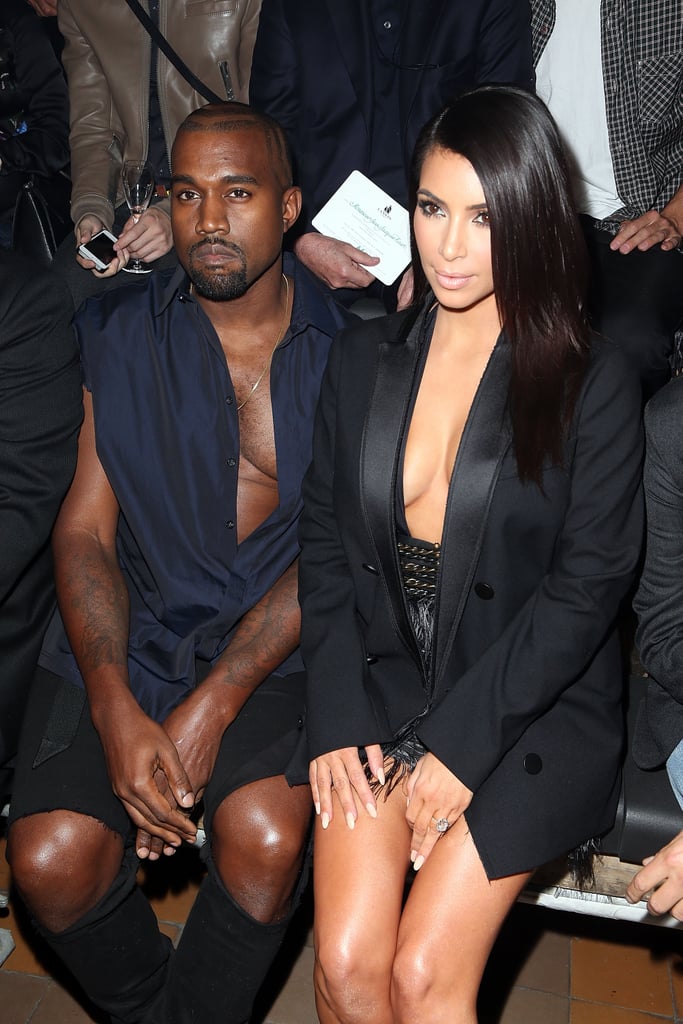 Kim Kardashian and Kanye West sat front row together at the Lanvin runway show during Paris Fashion Week on Friday and proved just how much your significant other's behaviour can rub off on you. Kim was clad in a black, cleavage-baring frock from the collection, while her husband, Kanye, showed off his own impressive pecs in a low-cut blue silk shirt; it's not hard to see how Kanye could have been inspired to show some skin, as Kim has pretty much perfected the art of putting her assets on display.

Kim and Kanye have been taking in the runway shows this week after arriving in France with their baby daughter, North West. The family was all smiles when they attended the Balenciaga show on Wednesday, but their overseas trip hasn't been without drama. While heading into the Balmain show on Thursday, Kim was attacked by notorious red carpet prankster Vitalii Sediuk, the Ukrainian "reporter" who both punched Brad Pitt on the red carpet and tried to crawl under America Ferrera's skirt at the Cannes Film Festival earlier this year. Video footage shows Vitalii being tackled by Kim's bodyguards after he tried to grab her while she exited her car. It seems that Kim and Kanye haven't let the scary incident get them down, as they showed sweet PDA in the front row at Lanvin and chatted with the brand's designer, Alber Elbaz. Keep reading for more photos of Kim and Kanye's matching cleavage at Paris Fashion Week.