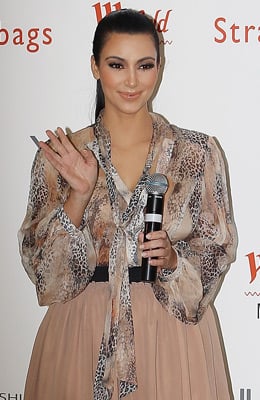 When Kim Kardashian visited Australia at the beginning of November with sister Khloé and brother-in-law Lamar Odom, she reportedly used a tourist visa, which has found her in a spot of trouble now it’s come to the attention of the Australian Immigration Department. Kim and Khloe travelled to Sydney just a day after Kim announced she was divorcing Kris Humphries — their trip had been on the cards for months and was heavily publicised as a visit to promote their Kardashian Kollection handbag range. It now appears that Kim was travelling on a tourist visa, and that she did the same on two previous work-related trips to Australia. What does this mean for the reality star? She has apparently been put on a watch list and could face some potential problems for the next time she chooses to travel here.

Pop Quiz
How Well Do You Know the Most Quotable Family Ever? Try This KUWTK Quiz to See
by Hedy Phillips 5 days ago

Kim Kardashian West
Everyone’s Sharing The Most Iconic KUWTK Scenes, And A B C D E F G . . . I Have To Go
by Bree-Grant 3 weeks ago

Kim Kardashian
The Internet Has Mixed Feelings About KUWTK Ending, and 2020 Haven’t You Taken Enough From Us?
by Bree-Grant 3 weeks ago

Product Reviews
I Previewed Every Item From the KKW x Allison Makeup Collab, and Here Are My Thoughts
by Macy Cate Williams 28/8
Latest Celebrity
×