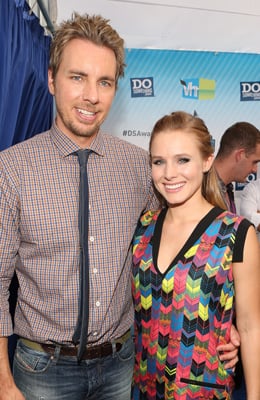 Kristen Bell is pregnant! The actress is expecting her first child with fiancé Dax Shepard, her rep confirmed to People. She was spotted shopping in Glendale, California last week with a hint of a baby bump. She is reportedly due in late US Spring.

Kristen and Dax, who were co-stars in When in Rome, started dating in 2007 and got engaged in 2009. But their upcoming baby arrival is more important to them than tying the knot, with Kristen telling The Advocate that they were in no rush to marry “because I don't feel appropriate taking advantage of a right that's denied to my [gay and lesbian] friends.”

Congrats to Kristen and Dax!

Pregnancy
Chrissy Teigen Is Put on Bed Rest After Misunderstanding What That Meant Last Week: "Now I'm in Trouble"
by Alessia Santoro 5 days ago