Do you remember in season four of Game of Thrones when Daenerys Targaryen locked up two of her dragons and they broke out in season six superstrong and ready to conquer? That's pretty much what happened to LeBron James following his groin injury in December. The Los Angeles Lakers forward missed his 16th consecutive basketball game after straining his groin on Christmas Day, but he's on the road to recovery — and what better way to celebrate healing than with shirtless, sweaty workout photos?!

On Monday, LeBron participated in "full-contact scrimmages" for the first time since his injury, and just like Viserion and Rhaegal, LeBron was ready to be uncaged. "Almost that time again! I've missed you so damn much! 😤🦁🗣 #BeenACagedAngryLion. #striveforgreatness🚀 #jamesgang👑," he captioned the series of photos on Instagram. Missing 16 games might not sound like a lot, but it's important to understand that for the self-proclaimed king, this is huge. He's missed games occasionally over the last 16 seasons, but prior to this groin injury, LeBron had only ever missed a maximum of eight consecutive games in the 2014-2015 season due to a back injury.

"He's still really good at basketball, in case you guys were wondering," coach Luke Walton joked to ESPN over the weekend. It's possible LeBron may miss another week or so, but we're not that mad about it after seeing him practice shirtless. Ahead, check out LeBron's jacked photos from practice, and to the Lakers, if you're looking for someone to hand out towels during practice, you know where to find me. 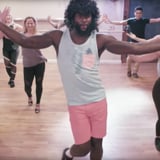 Race and Culture
"It's Not This 1 Mold": Elladj Baldé Discusses the Lack of Diversity in Figure Skating
by Chanel Vargas 4 days ago