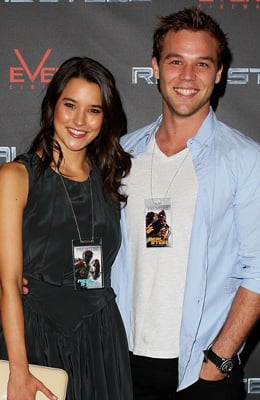 Hot young Aussie couple Lincoln Lewis and Rhiannon Fish have reportedly split. The Sunday Telegraph says the TV stars — he’s currently on Channel Nine’s Tricky Business, she’s a favourite on Home and Away — went their separate ways last week, with reports Rhiannon broke it off with Lincoln after he’d returned from working on a film with Will and Jaden Smith in the US. They started dating in September 2010 and moved in together at the end of last year.

Lincoln and Rhiannon, who often appeared at red carpet events together, used to exchange sweet tweets, and on June 10 Rhiannon posted, “Miss you @linc_lewis.” They haven’t hit social media to address their relationship status but a rep for Lincoln said on the weekend that he was single.