Lindsay Lohan's dramatic court date yesterday—which ended with her tearful breakdown as she was sentenced to 90 days in jail followed by a 90-day inpatient rehab stint—was full of hidden messages. She made headlines this morning with the secret "F*** U" nail she had on one hand and it turns out that her manicure wasn't the only memo on her mind. She took notes during the proceedings and held them up at the end of the afternoon. We've transcribed what LL wrote down, which began with the date and time, "July 6, 2010 1:40 pm @Beverly Hills Court (Dad's sitting behind Aliana/Those are her -so called- friends. . ." It seems like Lindsay was looking to detail exactly what she missed and when, while also keeping her mind on the media presence in the room as it was live streamed to the Internet—check it all out below. 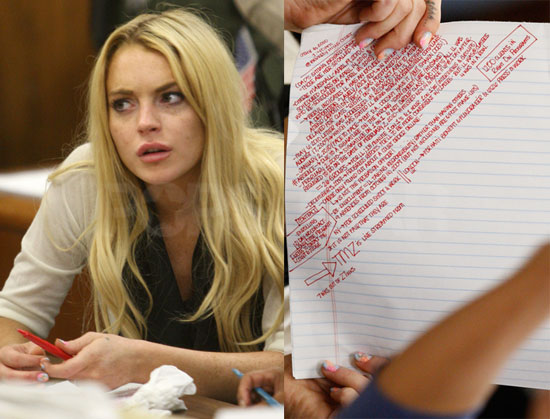 (Dad's sitting behind Aliana
"Those are her -so called- friends

-re-enrollment = LL taking responsibility; rather than having others
9 absences from October 16, 2009 (but not including pre & post makeups)

*It is not fair they are

TMZ is live streamed from