And the Queen of the 2010 Grammys is...I'm calling it a tie! While everyone was waiting to see Beyonce battle with Taylor Swift for the most awards, both women walked away winners in their own respect. Beyonce earned six honours, the most ever won by a female performer; Swift not only took home her first Grammy—and three others to go with it—but she also nabbed the big prize of the night: Best Album. The only time neither lady won? In a surprising upset, Kings of Leon beat them both for Record of the Year with their “Use Somebody.” 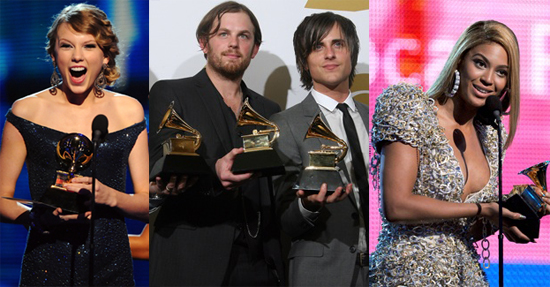 This year’s performances seemed even more exciting than years' past and I’d have a hard time choosing a favourite. As the honourees came back into the press room (more on that later), there was a ton of buzz about Pink's Cirque du Soleil-type ribbon routine, but I also enjoyed Beyonce's cover of “You Outta Know" and Lady Gaga and Elton John's piano duet in matchy glittered glasses. And of course, the 3-D Michael Jackson tribute brought in artists from every spectrum of music for a standing ovation. I'm curious to hear your thoughts, but right now, let's go over the winners.

RECORD OF THE YEAR
"Use Somebody," Kings of Leon

SONG OF THE YEAR
"Single Ladies (Put a Ring on It)," Beyonce

BEST POP PERFORMANCE BY A DUO OR GROUP WITH VOCALS
"I Gotta Feeling,"

BEST ROCK PERFORMANCE BY A DUO OR GROUP WITH VOCALS
"Use Somebody," Kings Of Leon

BEST ROCK SONG
"Use Somebody," Kings of Leon

BEST R&B PERFORMANCE BY A DUO OR GROUP WITH VOCALS
"Blame It," Jamie Foxx and T-Pain

BEST RAP PERFORMANCE BY A DUO OR GROUP
"Crack a Bottle," Eminem, 50 Cent, and Dr. Dre

BEST COUNTRY PERFORMANCE BY A DUO OR GROUP WITH VOCALS
"I Run to You," Lady Antebellum

BEST COUNTRY COLLABORATION WITH VOCALS
"I Told You So," Carrie Underwood and Randy Travis

BEST COMEDY ALBUM
A Colbert Christmas: The Greatest Gift of All, Stephen Colbert