I have to be honest here: I'm not entirely sure how I feel about the Lost series finale. In some ways, it's a perfect ending: epic, emotional, final. I teared up, I choked up and felt like I was sending my beloved show off into the sunset—just as I should. On the other hand: there are so many questions left. So many. The finale doesn't answer many of the things that die-hard fans have been waiting for since the first and second seasons. I feel a little manipulated—part of the reason I got so hooked on Lost is because I couldn't wait to see the show's many mysteries unfold. 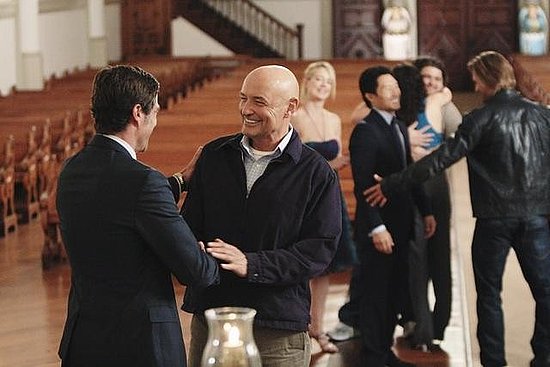 Whether you're satisfied with it or not, there is so much to talk about! I want to hear all of your thoughts, so without further adieu, let's begin.

In the sideways world:

And now for the ending!

So the ending is obviously open to interpretation, but what's your take? I have about a billion questions, but as far as I'm concerned, the final takeaway that the Lost creators intended was that it's always been about the characters and their relationships with each other. Yes, we still don't really know why the polar bear was there or what Walt's special powers were, but the heart of the show has always been how the characters have affected each other's lives. And they are all together in the end. As for me, I think that Jack's sideways universe starts the moment he dies in the jungle, and he finally feels retribution when he's reunited with the Losties and with Kate. He did say on the island that he had nothing left in his life in LA. Jack found meaning and purpose with the island the people there, so that's what he chooses for his afterlife. His motto was "live together, die alone," and that technically proves to be true in the end—but Jack learns that he never really has to be alone, even after his death. What did you love or hate about the episode? Ready, set, break down!