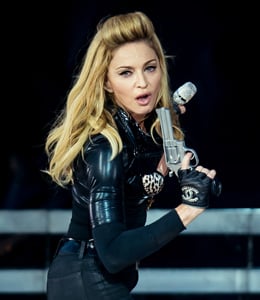 Sorry to disappoint, Madonna fans, but the music icon has scrapped plans to tour Australia in 2013. She just performed in London on the European leg of her MDNA world tour and was originally going to wrap it up in Australia next year in what would’ve been the first time she’s toured here in 20 years. But she apparently had a change of heart overnight, according to her manager, Guy Oseary, and promoters Live Nation Australia have confirmed the news. Fans are suitably disappointed.

Music
Zayn Teased His First Solo Single in 2 Years, and It's Already "Better" Than We Could Imagine
by Mekishana Pierre 2 days ago

Music
Kelly Clarkson Covered Lizzo's "Good as Hell," and Yep, It's Exactly What the Title Suggests
by Kelsie Gibson 3 days ago

Music
BTS Just Did a Tiny Desk Concert, and "Dynamite" Sounded Unreal With a Live Band
by Perri Konecky 4 days ago

Award Season
H.E.R. Belts Passionate "Nothing Compares 2 U" Cover During the Emmys In Memoriam Segment
by Brea Cubit 5 days ago

Music
Wondering Why You Recognise That Scary Music in Ratched? It's Pulled From a Classic Thriller
by Hedy Phillips 47 minutes ago

Music
Lady Gaga's "911" Video Is a Powerful Statement About Mental Health: "It's the Poetry of Pain"
by Monica Sisavat 5 days ago