What is it with MasterChef and super emotional elimination episodes marking the end of the series’ “bromance”? Last year the final two boys standing were buddies Hayden Quinn and Michael Weldon, and when Hayden left there were tears. This year it was Ben Milbourne and Andy Allen, and despite Andy saying, “I’m just praying that Ben’s dish was a little better than Julia’s, because I don’t want my best mate to go home,” their TV bromance came to an end when Ben was eliminated “by the narrowest of margins” after cooking a pan roasted rib-eye that lacked direction and clarity. Judge Matt Preston said, “We just at this stage needed to see more. We’re really sorry to see you go.” 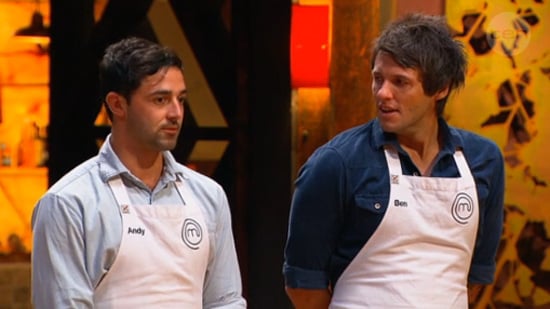 When it came to reflecting on his time on MasterChef, a teary Ben said, “I’m not normally a crier, and I think it’s a fair indication of how emotionally involved you become in what this is. You have to leave behind everything you love. Along the way you meet people and you go through experiences. I think the best thing for me today is hearing what you just said about him [Andy]. I’m extremely proud of him. He’s come a long way. I think he is the favourite now.” Andy responded, “He’s not just a best mate, he’s a role model. He’s definitely blown me away with everything that he does. I can’t wait for the next bit of our lives to start.” Ben and Andy met on the first day of auditions, clicked right away, were roommates in the house, and now have plans to open a Mexican eatery together. Did you get emotional watching last night’s elimination?

TV
The Mandalorian: What We Know About That Weird Pedro Pascal Rumour
by Amanda Prahl 5 hours ago