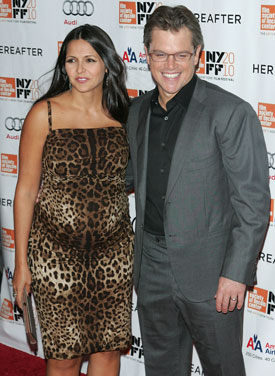 Luciana and Matt Damon confirmed that they welcomed daughter number four, Stella Zavala Damon, on Wednesday in NYC! She joins big sisters Gia, Isabella, and Alexia, and according to Matt's rep, "Mum and baby are both healthy . . . The whole family is thrilled."

Stella was born in the same month as her famous dad Matt, who recently spoke about celebrating his 40th with friends and family at a bowling party. Matt's also marking the release of his new movie Hereafter, and in its honour we took a look back at his career evolution. Congrats to Matt, Luciana and their growing family!