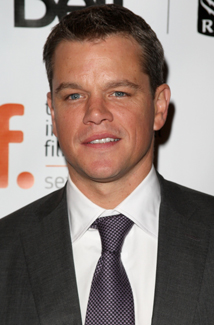 Matt Damon is about to get political. The Invictus actor is said to be considering the lead role in a biopic about Robert Kennedy, JFK's younger brother. The subject of the young senator was recently taken on in 2006's Bobby, but this movie, based on the Evan Thomas biography Robert Kennedy: His Life, will actually focus on the man himself more than his tragic assassination.

Damon is nominated for an Oscar this year for playing another real-life figure, but portraying RFK is undoubtedly a formidable challenge. The actor certainly has the chops, though, and I personally think he'd be fantastic as a charismatic young politician—what say you?