The stars of Mad Men may have been snubbed in the acting categories at the Emmys, but the cast crammed together in the press room with creator Matt Weiner after winning best drama series. They laughed off their reputation for being party animals while Jon Hamm and Weiner took the microphone to talk reactions and what makes Mad Men so great. 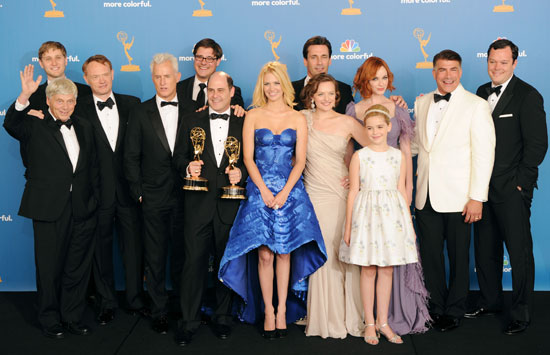 How does it feel to win three years in a row?
Matt Weiner: I'm overwhelmed. We worked very hard, and it is an honour being nominated and I can't believe we won.
Jon Hamm: It was completely unexpected, and the quality of the nominees, this season more than any other, really, is phenomenal. To be singled out in that group of shows continues to be amazing. We're humbled and thankful.

If you were really shocked, what did you think was going to win?
MW: I thought that Breaking Bad might win, they had an amazing season. And I also, like a lot of people, thought that Lost might win. Just because it was going off the air and being such a landmark in television.

Why do you think people connect with Mad Men?
JH: I think our show is different from a lot of other shows. I think it's, in many ways, unique. But addresses truth about the human condition and relationships and life and politics and work, and all of these things that are universal. And they exist for all of us throughout time. Things that don't have to do with a particular period or time. And I think that's why our show does resonate across generations. People that lived through this time, or children of people that lived through this time, or people that have no connection to this time whatsoever. The joy of watching this show. Because it's different. There's something special about putting something different on the air. And I think that's what Lost is, honestly. That's what Breaking Bad is, that's what Dexter is. That's what a lot of these wonderful programs are. They're different. And amazing to be celebrated for that.

I see Bryan Batt up on the stage, is Sal Romano coming back this season?
MW: Real fans of the show don't want to know they want to watch every week. And they should.

Earlier this year there were rumours that you were setting an end date for Mad Men. Would you like to be a show that sets an end date?
MW: Yes. And I don't know when it is yet. We're all enjoying it. We'd do it forever.