Mirror Mirror, the candy-coloured vision of director Tarsem Singh, is the latest take on a classic fairy tale, with Lily Collins filling the shoes of Snow White and Julia Roberts as her nemesis, the wicked queen. But even with a solid cast and Singh's risk-taking aesthetic, the uneven script and undeveloped characters reduce it to a retread of an old story with a very pretty look. You know how it goes: the queen married Snow White's father, and after he dies, she sets about to get rid of anyone prettier than herself. That makes Snow White target No. 1, and when the girl is run out of the kingdom, she's forced to take shelter with a group of outlaw dwarves in the forest, becoming their caretaker of sorts. In this version, Snow White becomes their vigilante leader, while the perspective is largely from the wicked queen, who's trying to solve her financial problems by marrying rich Prince Alcott (the very dreamy Armie Hammer). While these twists are cute tweaks of the well-known tale, they don't make the story different enough, and the film drags on toward its obvious conclusion. 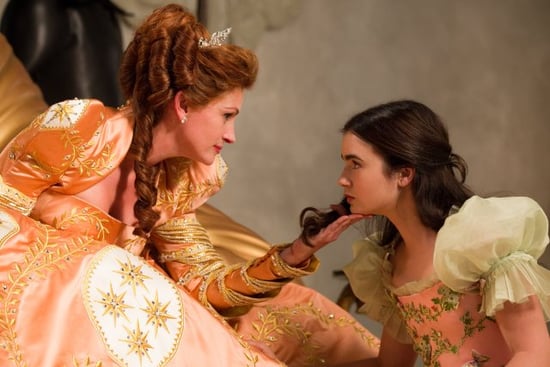 Singh is known for his bold, arresting aesthetic, like in films The Cell and Immortals, and he definitely has fun reimagining the setting of Snow White and her fairyland. It's clear that he's reining in the weirdness to give the film wider appeal, but some unusual elements sneak in there, like some creepy villainous puppets and a scene with the queen's downright gross beautifying routine. As polarising as those scenes may be, the movie could have used some more weirdness, if only to give it a clearer angle. Sadly, the creativity is used up on the visuals, and the rest of the film suffers.

To find out why else I was disappointed by Mirror Mirror, just keep reading.

There are some laughs scattered through the movie, mostly delivered by Roberts as the queen. While Roberts is capable of sinking her teeth into a deliciously devious role, this version of the queen is pretty innocuous. Yes, she does cruel things like banish Snow White from the kingdom, but it rarely comes off as bloodthirsty or desperate. I was looking forward to Roberts being as evil and over-the-top as possible, but the character isn't even really that mean (and she's mostly concerned with money rather than being insanely jealous). Though she could have had more fun, Roberts' queen is pretty de-clawed.

The highlight of the movie is Hammer, who's perfectly cast as the prince. He's arrogant and brave, dashing and gorgeous — every bit of what a fairytale prince should be. Prince Alcott is the character with the most personality, and with the disarming, funny Hammer playing him, he's the one you want to see the most of. Instead, we spend the bulk of our time with the queen or Snow White, and while Collins is breathtaking, her Snow White has very little depth. She's sweet, and eventually she does pick up a sword, but that's not something we've never seen a princess do before.

It's hard to get invested in any of Mirror Mirror's characters. We don't learn anything about the queen to make us feel sympathy for her, and Snow White's blandness doesn't make us want to root for her, either. Mirror Mirror doesn't just have a lack of heroes and villains; the tone never becomes clear, and while it feels like a comedy, there aren't enough laughs to convince me of that. It's a predicament that even a prince as charming as Armie Hammer can't fix.

Movies
Enola Holmes: Nobody Explicitly Says What the Reform Bill Is, but We Can Decipher the Clues
by Brea Cubit 8 hours ago

Movies
Enola Holmes Gets a Happy Ending, but Not Before Solving a Big Mystery
by Grayson Gilcrease 8 hours ago

Movies
For Anyone Wondering, Enola Holmes Takes Place in the 19th Century — Here's the Exact Year
by Brea Cubit 8 hours ago

Pop Quiz
Convinced You're a Connoisseur of Classic Horror? Put Your Villain Knowledge to the Test
by Hedy Phillips 8 hours ago

Pop Quiz
Test Your Legally Blonde Quotes Knowledge Now with This Quiz — What, Like It's Hard?
by Amanda Prahl 10 hours ago