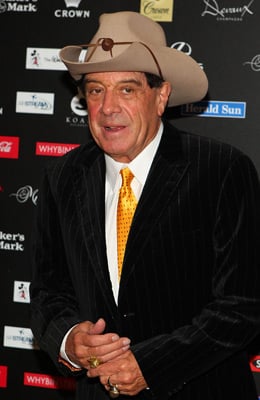 Molly Meldrum underwent surgery last night for several life-threatening injuries after he fell from a ladder at his Richmond home. The Australian music industry legend was reportedly putting up decorations around his house for an upcoming Christmas party when he fell, and he was found by his gardener, unconscious and in a critical condition. Paramedics arrived around 6:40 p.m. and took him to The Alfred Hospital in Melbourne, where he had surgery to relieve pressure on his brain. Family and friends are now by his side.

Celebrities and fans hit Twitter last night to express their support for the 65-year-old, who made his mark on the music industry by hosting TV’s Countdown in the ’70s and ’80s. He has also interviewed lots of the biggest names in music, most recently Beyoncé, and his interview with her for Sunday Night made international headlines after people accused her of wearing a prosthetic baby bump. Stars like Kylie and Dannii Minogue, Darren Hayes and Boy George tweeted about their affection for Molly and their hopes for his recovery.

Music
Zayn Teased His First Solo Single in 2 Years, and It's Already "Better" Than We Could Imagine
by Mekishana Pierre 1 week ago

Music
Kelly Clarkson Covered Lizzo's "Good as Hell," and Yep, It's Exactly What the Title Suggests
by Kelsie Gibson 1 week ago
Latest Celebrity
×