It's not that I was expecting a film adaptation of Cormac McCarthy's The Road to be happy sunshine—I just wasn't expecting it to seem so possible.

The apocalyptic tale takes place in a wasteland in the future after most humans are gone. It's desolate, the sky is a brownish-gray, and the land seems to be covered with ash. Unlike showy 2012, this is an end-of-the-world tale stripped down, which makes it all the more realistic and chilling. To see what I mean, just read more.

. We meet Man (Viggo Mortensen) and Boy (Adelaide-born child actor Kodi Smit-McPhee), a father and son making their way down south because they can't survive another Winter in this ominous setting. (Charlize Theron plays their wife and mother through a series of flashbacks). With a meager amount of food left on the planet, the select few people remaining (and there aren't many) will basically kill for supplies—or turn to cannibalism for sustenance. If this sounds like a horror film, it's because it pretty much is one. In fact, it's the worst, most plausible kind: one that explores the evils of humanity. 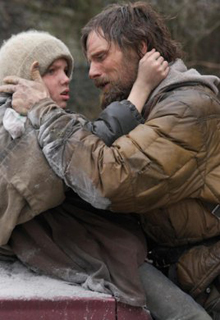 I'm sure many viewers won't be able to (or won't want to) stomach the subject matter, but the film is worth seeing thanks to the relationship between the father and son. In terms of plot, there isn't a lot that happens and most of the action involves bumping into new strangers, like an elderly man (Robert Duvall) and Guy Pearce makes an appearance towards the end. Some may find the lack of events monotonous, but this is why father and son are so important. Man is an average Joe who questions how far he'll go to keep Boy safe and what that means for his conscience; Boy is an innocent who still looks for good in people. Australian director John Hillcoat creates a film that raises questions about the nature of who we are when tested—but the story is ultimately about their relationship. As Man, Viggo Mortensen gives a mesmerizing performance and even lived as a homeless man, shunning food warm clothing and shelter during the frigid shoot. Smit-McPhee as his son is a great child actor, especially given the dark subject matter and also showed great commitment during the grueling shoot. If you're a McCarthy fan or even just a fan of great acting, you'll want to check this one out.