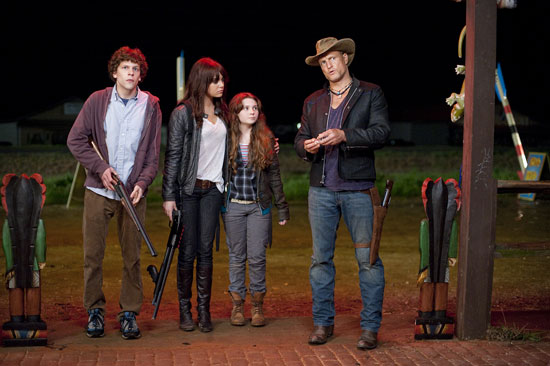 I'm not really big on zombie movies, generally speaking, but I'm pretty much sold on this particular zombie movie. It's really the cast that makes me want to see the film: Jesse Eisenberg is the dorky little guy who gets paired up with the crazy, Southern-drawlin' Woody Harrelson and the two make for a very fun zombie-fighting team as Eisenberg's character uses the movie to run through the rules for surviving "zombieland." Check out the trailer below.

Movies
The Where the Crawdads Sing Movie Adaptation Has Landed Its Kya: Daisy Edgar-Jones!
by Chanel Vargas 17 hours ago

Movies
Rebecca's Ending Ties Everything Up With a Neat Bow Even Mrs. Danvers Would Approve Of
by Grayson Gilcrease 20 hours ago

Movies
It's Officially a Perfect Day: The Legally Blonde Cast Reunited For the First Time Since 2001
by Mekishana Pierre 20 hours ago

Movies
Just Like Rebecca, These 11 Movies Are Sure to Give You a Thrill
by Grayson Gilcrease 1 day ago