In My Week With Marilyn, Michelle Williams takes on the formidable challenge of playing '50s screen siren Marilyn Monroe. She proves that she's capable and delivers a performance that goes beyond mimicking Monroe; Williams creates a character that you appreciate outside of the real person. The film follows Marilyn while she was in the UK filming the 1957 movie The Prince and the Showgirl opposite Laurence Olivier, but the story is told from someone far less famous than those Hollywood legends. Colin Clark (played by Eddie Redmayne), a young production assistant on the film, wrote the memoir the film is based on, and the story — and impression of Marilyn — are all from his perspective. 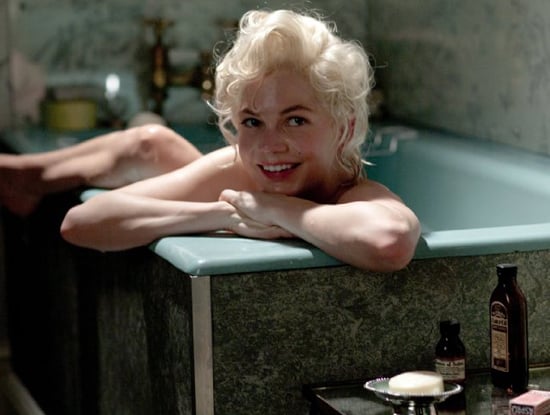 The shooting of the film doesn't go smoothly, due to the difficulties caused by Monroe's acting insecurities. She frustrates Olivier, who is not just her leading man, but also director and producer. Marilyn needs constant support, but when her new husband Arthur Miller has to go back to the US to work, she has to find it elsewhere, and takes a shine to Colin. They become friends and confidantes for a week, and they're a magical few days for Colin. Though he experiences ups and downs with the actress, he still falls for the woman easily, in much the same way that I fell for this lovely film. To find out why I was so charmed by My Week With Marilyn, just keep reading.

Williams has clearly gone to great lengths to get aspects of Monroe down right. Her hair, makeup and costumes contribute to the physical transformation, and Williams also works hard to achieve Monroe's voice. Those things help, but they wouldn't count for much if Williams hadn't delivered such a strong performance. She handily plays a woman who goes back and forth from being a bombshell for the public, and someone needy and frequently erratic in private. Even when she's less together, Williams is luminous and mesmerising, with charisma not unlike that of the real Monroe.

Williams is tasked with portraying a legend, but she's not the only one. Kenneth Branagh co-stars as Sir Laurence Olivier, who was struggling himself with the challenges of trying to be a movie star as well as a great actor. Branagh is superb as Olivier, and able to express the actor's own discontent with his career. Judi Dench plays stately British actress Dame Sybil Thorndike, and she does Thorndike a great service by portraying her as warm, elegant and gracious, especially in her interactions with Monroe.

As Colin, the outsider who has a magical week with a Hollywood legend, Redmayne has the perfect wide-eyed outlook to experience Marilyn through; his awe of her is palpable, even when he's exposed to her imperfections. Emma Watson shows up as a costume assistant who tries to bring Colin back down to earth about Marilyn, but she has little influence on him. His affection for Marilyn is so great that it doesn't matter if he can't have anything real with her, and it doesn't stop you from wanting to believe he can.

Though Williams is able to show Marilyn as kind of a mess, the film reins back from portraying all of the dark aspects of her life, with only a few allusions to Monroe's substance abuse. Instead, the film operates entirely within Clark's brief encounter with the actress. In doing so, the film maintains a lighthearted, upbeat tone that's a delight to watch, even if you know the context of the story (her tragic death at 36 takes place six years after the events in My Week With Marilyn). But the film isn't a biopic, and it isn't trying to be. Instead of trying to paint a picture of her troubled life, it's a sweet portrait of Monroe, the way many of us would rather remember her.

My Week With Marilyn sessions are available at Village Cinemas Gold Class.