As Sundance revs into action, The Runaways is one of the films at the top of many a must-see list. But the qustion is whether lead Kristen Stewart can leave Twilight's meek Bella behind and channel the ferocity needed for a musical icon like Joan Jett. If last month's teaser trailer is anything to go by, Kristen has the rock-n-roll attitude (and the hair) down, and now we're getting a closer look with a just-released clip and several new pics. 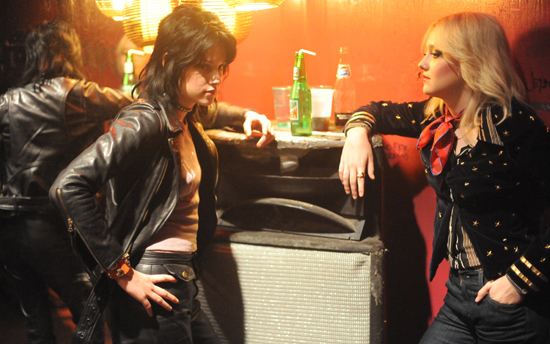 In the brief snippet, we watch as Cherie Currie (Dakota Fanning) is introduced to Joan, thus beginning their collaboration. Fanning is totally trying to give off tough chick vibes to the camera, which is taking me some getting used to (sorry, Dakota, but your sweet, child actor days aren't the easiest to block out of memory). Still, the new footage and stills have certainly piqued my interest. Watch the clip, and check out all of the new photos (seven total!) for yourself.