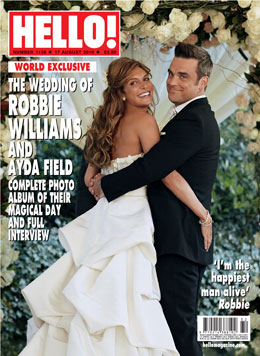 Robbie Williams married Ayda Field in LA on Saturday and now we've got the official pictures from their ceremony! Rob and Ayda shared their special day with Hello! and chatted with the magazine about the bridesmaids, cake and Ayda's Monique Lhuillier gown. Here are the highlights:

The couple also chatted about the rest of banquet at the reception, which included sushi, steak and a traditional English breakfast. They revealed the details of Robbie's Christmas Day proposal and their first date, and said they're not in a rush to have a baby. Photo: You’re Not Famous via Getty Images