George Clooney had girlfriend Elisabetta Canalis on his arm yet again Saturday for the premiere of Up in the Air during the Rome Film Festival. The duo has their red carpet routine down pat after stints in front of the cameras earlier last week for The Men Who Stare at Goats and The Fantastic Mr. Fox in London. George has his hands full with three movies to promote at the same time, and Elisabetta seems happy to go along for the ride. He was out earlier in the day without Elisabetta, though, to join director Jason Reitman at a laughter-filled photo call and press conference. George has been charming as always on the press circuit including joking about how old he looks on screen and playing a prank on Matt Damon. When Matt stayed in Como while trying to lose the weight from The Informant!, Clooney would secretly have Matt's pants taken in so he felt like he was gaining weight rather than losing it. 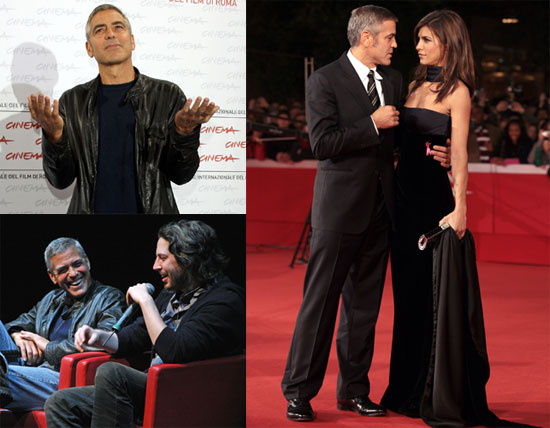 To see more of George and his girl, just

Celebrity Friendships
Even When Cracking Each Other Up, George Clooney and Brad Pitt Know How to Own a Red Carpet
by Kelsey Garcia 08/8/19
Latest Celebrity
×