The stars went from the orange carpet at Saturday's Kids' Choice Awards in LA into the show, where host Kevin James kept things under control amid multiple slimings. Katy Perry had the honour of being doused in the green goo when she was onstage with Jonah Hill and Date Night stars Tina Fey and Steve Carell faced a similar fate. Zoe Saldana and Robert Downey Jr. stayed dry while announcing Alvin and the Chipmunks: The Squeakquel as the winner of Favourite Movie and Miley Cyrus was there to take home the Favourite Movie Actress blimp. 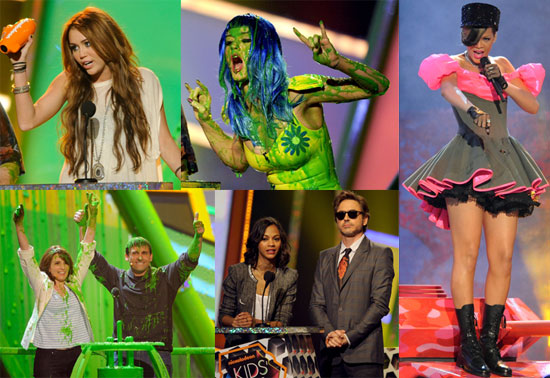 Taylor Lautner was a happy camper backstage after he won Favourite Movie Actor and shared the Cutest Couple honour with Kristen Stewart for New Moon—sadly, she couldn't be there since she was off with her The Runaways costars in Las Vegas. The third in their on-screen love triangle, Robert Pattinson, also missed out due to filming in the UK. Justin Bieber was there to up the teen heartthrob count, performing a song off his newly-released album. Selena Gomez was happy to be declared Favourite TV Actress and Cory Monteith joined his Glee costar Lea Michele to present the TV Actor award to Dylan Sprouse. Make sure to check out the whole list of honourees and let us know what you think of the day's fashion and beauty with Fab and Bella's love it or hate it polls! 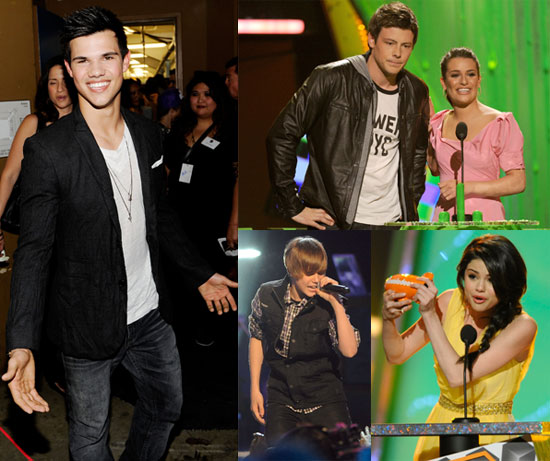 More pics from the show and the orange carpet after the jump.

Selena Gomez
So, Here's the Deal With Those Selena Gomez and Jimmy Butler Dating Rumours
by Monica Sisavat 03/12/20

Movies
It's Great Silvia Vásquez-Lavado's Story Will Be Told, but Selena Gomez Shouldn't Be Playing Her
by Grayson Gilcrease 13/11/20
Latest Celebrity
×