There was even more Fall New York Fashion Week fun to be had yesterday afternoon, with Rodarte bringing out a few of their loyal Hollywood followers. Kirsten Dunst, who's a longtime attendee of the Mulleavy sisters' shows, was there to see the Mexican/sleepwalker-inspired collection along with Jason Schwartzman, Natalie Portman and Chloe Sevigny. Rachel Zoe was also on hand, after sufficiently recovering from the Marc Jacobs afterparty. Christina Hendricks, who's on the cover of the most recent New York magazine talking about body image, made a special cameo at Badgley Mischka. While our very own Melissa George bought a lil' Aussie sunshine to the front row of Max Azaria. As usual, Fab and Bella have the scene covered, so make sure to stay tuned to all the latest! 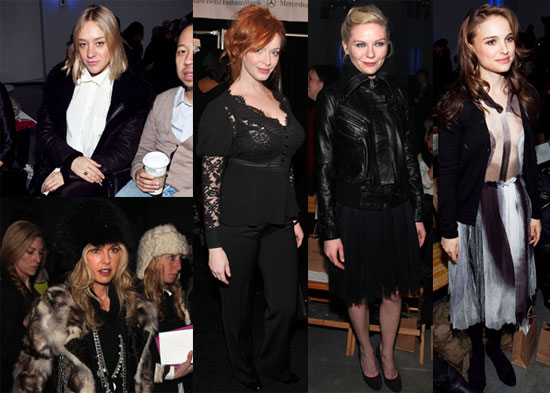