Kristen Stewart bared those legs once again yesterday when she stepped out for the Burberry show during London Fashion Week. She also showed off her stems in another short dress at the Elle Style Awards, where Kristen was named Woman of the Year. Joining Kristen for Burberry were fellow fashion lovers like Mary-Kate Olsen, Kate Hudson and Kristen's New Moon costar Jamie Campbell Bower, who brought girlfriend Bonnie Wright. Monday's BAFTAs gave Kristen another opportunity to wear a minidress, while fellow attendee Robert Pattinson stuck with a classic tux. The pair attended an afterparty together and according to The Sun—therefore, take with a grain of salt—Rob confirmed their romance to a friend. 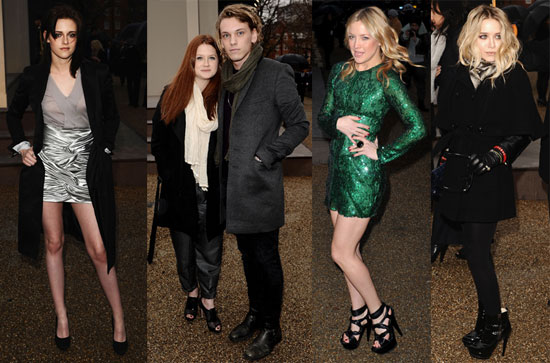