Anna Kendrick was belted and in blue this morning as she smiled for photographers at a press conference for Up in the Air in Tokyo. Her film has been out here for over two months now, but it's due to hit theatres in Japan on March 20. The last few months of awards season were busy for Anna and things haven't slowed down for her or her costars since the Oscars. George Clooney headed right off to work on The Descendants in Hawaii, while Anna made a quick trip to Vancouver. She's soon to be back in front of the cameras herself when she joins Seth Rogen in his latest comedy and then it's back on the promotional trail before Eclipse is out in June. 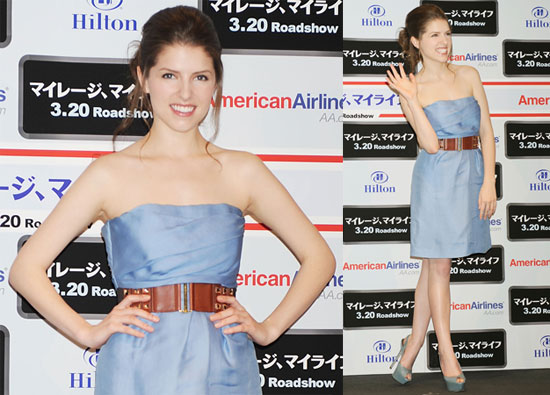 Image Source: Getty
Join the conversation
Anna KendrickUp In The Air
More from POPSUGAR
From Our Partners
Related Posts

TV
Exclusive: Anna Kendrick and a Talking Sex Doll Befriend a Burglar in Teaser of Quibi's Dummy
by Brea Cubit 27/4/20

Celebrity Interviews
Justin Timberlake and Anna Kendrick Will Not Stand For Billie Eilish Slander: "She Is Great"
by Brea Cubit 02/4/20
Latest Celebrity
×