The Shrek Ever After premiere kicked off the Tribeca Film Festival with an animated bang last night. Cameron Diaz was the film's female representative with her costars Eddie Murphy, Mike Meyers and Antonio Banderas also joining in on the fun. The festival's founder Robert De Niro came out to support the movie and begin the eighth-annual weeklong cinematic event. CaCee Cobb and Donald Faison looked happy and in love, showing that he has no hard feelings after her TMI bathroom tweet. One castmate not in attendance was Justin Timberlake, whose antics with Cameron during the last Shrek press tour had all eyes on them. The exes are working together again on Bad Teacher, which has already caused much buzz about their close relationship. 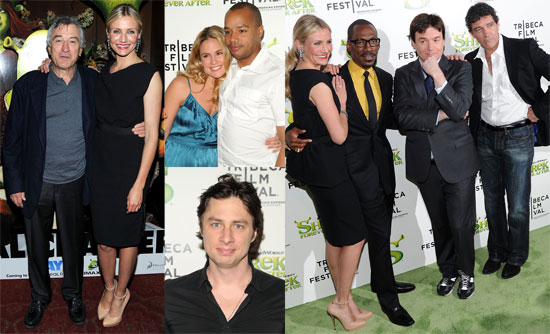