Channing Tatum and his wife, Jenna Dewan, hit the red carpet last night at NYC's Tribeca Film Festival for the premiere of Earth Made of Glass, a documentary they co-produced about the conflict in Rwanda. Channing didn't mind working on his 30th birthday, telling us that he and Jenna actually celebrated on Saturday. The actor was still sporting his moustache required for Son of No One and said that his costar Katie is a serious actress who shows up and is all about the work. Jenna, meanwhile, weighed in on their upcoming one-year wedding anniversary, saying, "I don't know what we're doing, but we better do something!" The couple's friends Nick Zano and Haylie Duff came out to lend their support, with Hayley even dishing a few details about her sister Hilary's upcoming wedding. Hilary's staying low-key about all the planning, but Haylie said, "I don't think the surprise of the proposal ever wears off." 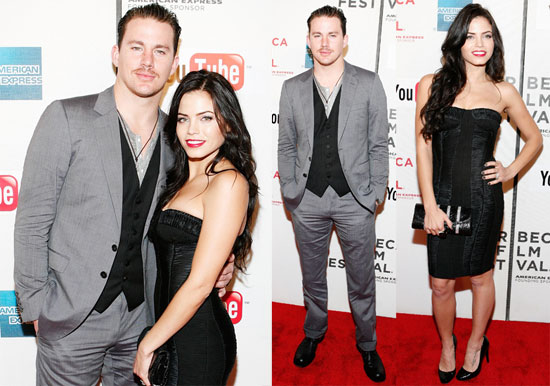