David Beckham was back in his courtside seat last night to watch the Lakers beat the Oklahoma City Thunder. Charlize Theron, also in plaid, sat nearby with her agent Ari Emanuel, while Kellan Lutz and AnnaLynne McCord shared popcorn and fairy floss. Loyal Lakers fan David has been lapping up the NBA playoff action, but he'll miss some of the series—David's scheduled to join the ladies of The View on Monday, following in the footsteps of his wife, Victoria. David's achilles' injury and subsequent time off from soccer have opened his schedule for interesting appearances—apparently even Snoop Dogg wants to work with him. 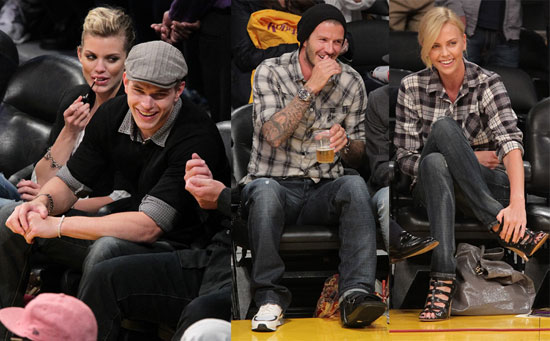 Movies
Sorry, Folks! Charlize Theron Won't Be in the Furiosa Movie — Here's Why
by Amanda Prahl 15/10/20

Movies
The Old Guard: Andy's History Goes Much Further Back Than You Probably Think
by Amanda Prahl 13/7/20