To say we're excited about the upcoming release of Cinderella is a bit of an understatement. The live-action film is directed by legendary Kenneth Branagh and stars our own Cate Blanchett as the wicked stepmother to Downton Abbey star Lily James' Cinderella. If you've seen the trailers and beautiful pictures, you'll know we're in for a visual feast that'll give us that same feeling as when we watched the animated version as children. The world premiere of the movie took place in Hollywood on Sunday night (Monday, Australia time) and saw Lily, Cate and Kenneth joined by Game of Thrones' Richard Madden, who plays the all-important role of Prince Charming in the film.

Yesterday Kenneth went into detail on the elaborate casting process for the film, telling The Hollywood Reporter that it was a laborious process finding the perfect woman to play the Disney heroine. "It was a long process," he said. "I joined Cinderella, and they'd been working for a little while. There had been some screen tests. They'd seen hundreds and hundreds of girls. And Lily came in to read for one of the stepsisters. I remember [the casting director had] sent me a tape, and I was going to grab something, and I heard her. It was literally the voice to start with, because it's that warmth, those colours, that we needed." Look at these images of Lily at the premiere just now, you can see she's got the self-possession to carry of a role this big — and we can't wait! Scroll to see all the stars at the premiere in Hollywood. 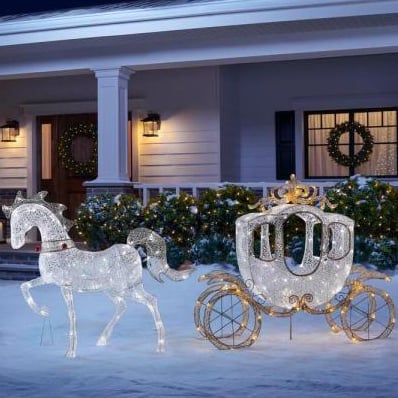 Christmas Decorations
Home Depot Is Selling Sparkling Carriage Decorations, So You Can Put a Cinderella Twist on the Holidays
by Camila Barbeito 4 days ago