Scarlett Johansson arrived at the Theatre World Awards in NYC earlier today in a very of-the-moment nude dress. It was Scarlett's latest Broadway event, after recently joining her A View From the Bridge costar Liev Schreiber at the Drama Desk Awards. She's back on the US East Coast after walking the red carpet at the MTV Movie Awards in LA. Scarlett also participated in one of the evening's most headline-grabbing moments by sharing a quick kiss with Sandra Bullock that the Generation Award honouree apparently masterminded. Scarlett was there in lieu of her husband, Ryan Reynolds, who may actually be reteaming with his The Proposal costar in an upcoming action comedy. 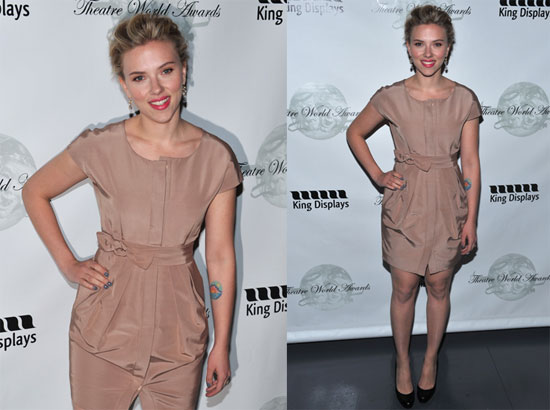