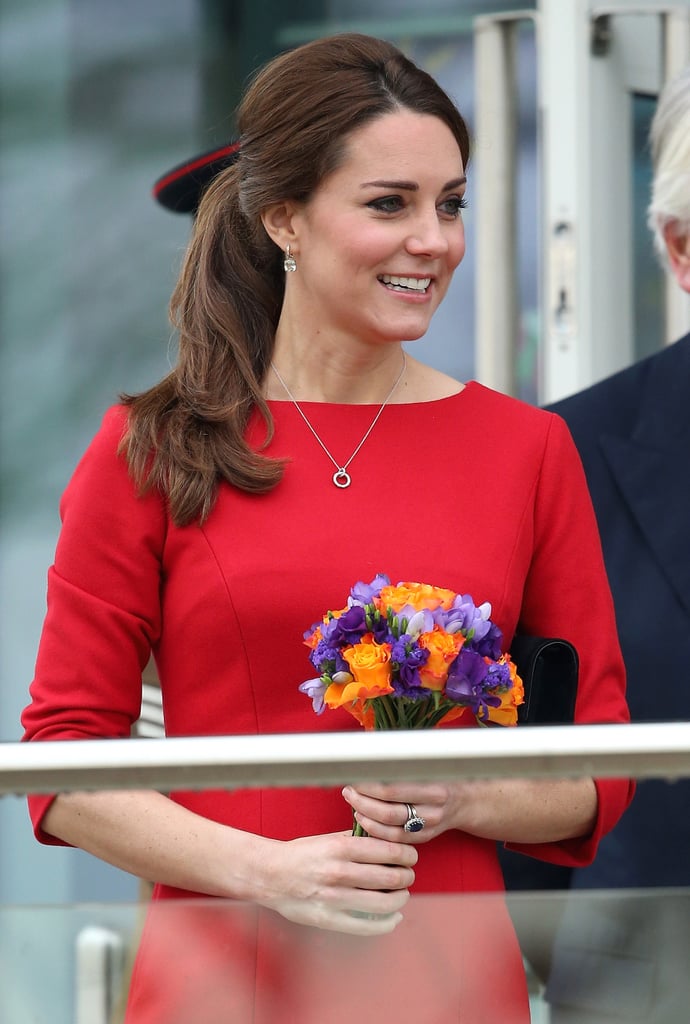 The Duchess of Cambridge showed a hint of her baby bump on Tuesday when she arrived at Norfolk Showground in Norwich, England, to attend a fundraising launch for East Anglia's Children's Hospices. Kate Middleton wore a red Katherine Hooker dress, which she paired with black heels. While her outfit was perfectly business appropriate, the dirt-covered paths outside the showground proved to be difficult to manoeuver in Kate's pumps. Despite this, Kate continued with her royal work, even stopping to greet a group of children who were waiting to give her a bouquet of flowers. She'll be meeting with other children and families throughout the day to hear about their experiences with the hospice charity. The East Anglia's Children's Hospices is a cause close to Kate's heart as she has been a patron of the organisation since 2012. Her appearance this week is to launch a $15.6 million fundraising effort, which will raise money for a new hospice and other expenses within the charity.

It's been a busy time for Kate, who just last Wednesday attended a charity gala for another one of her favourite charities, Place2Be, at Kensington Palace. Things won't be slowing down any time soon as Kate and Prince William are slated to visit NYC and Washington DC from Dec. 7 through Dec. 9. The pair's visit — which is both of their first time visiting the two American cities in any capacity — is not an official royal tour and is, instead, meant to be on behalf of their various charities.