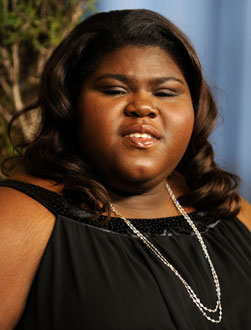 Gabourey Sidibe was the first brave soul to chat with reporters today in the press room at the 2010 Oscar nominees luncheon. The Hollywood newcomer was effervescent and witty as usual, even quipping that the reporters should stand when giving her a round of applause upon her entrance. Gabby admitted that she still hasn't found her Oscar dress yet, but wasn't shy when it came to expressing her excitement about the big night ahead. Here's what she had to say:

Stay tuned for lots more from the Oscar nominees!