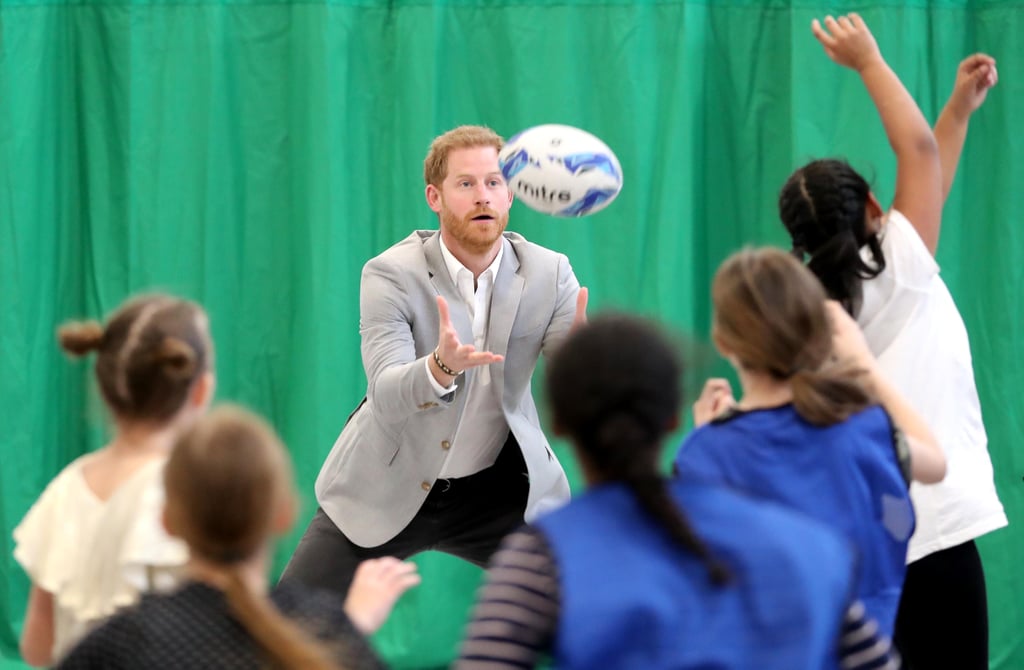 Prince Harry is about to become a dad for the first time, but that isn't slowing him down. Shortly after Harry and Meghan Markle announced their plans to keep the birth of their baby private, the royal stepped out for a solo appearance as he visited the Barking & Dagenham Future Youth Zone in Dagenham, England, on Thursday. Wearing a grey coat and black slacks, Harry was just as charming as ever as he greeted kids and offered a few warm hugs. At one point, he even showed off his sporty side as he tossed around a ball with some of the younger children. Let's just say, his facial expressions will make you giggle.

Harry and Meghan are expected to welcome their first child sometime later this month, but it seems like they'll be doing things a little differently. A statement released to the press explained, "Their Royal Highnesses have taken a personal decision to keep the plans around the arrival of their baby private. The Duke and Duchess look forward to sharing the exciting news with everyone once they have had an opportunity to celebrate privately as a new family." Even though Harry and Meghan don't plan on posing for photos with baby Sussex, we will get a glimpse of their bundle of joy eventually. The royal duo will reportedly partake in a photo op with their new addition at Windsor Castle a few days after the baby's birth. We can't wait!

Related:
Everything You Need to Know About Baby Sussex, in 1 Handy Place
0
previous images
-2
more images
Previous Next Start Slideshow
Join the conversation
The RoyalsThe British RoyalsPrince Harry
More from POPSUGAR
From Our Partners
Related Posts