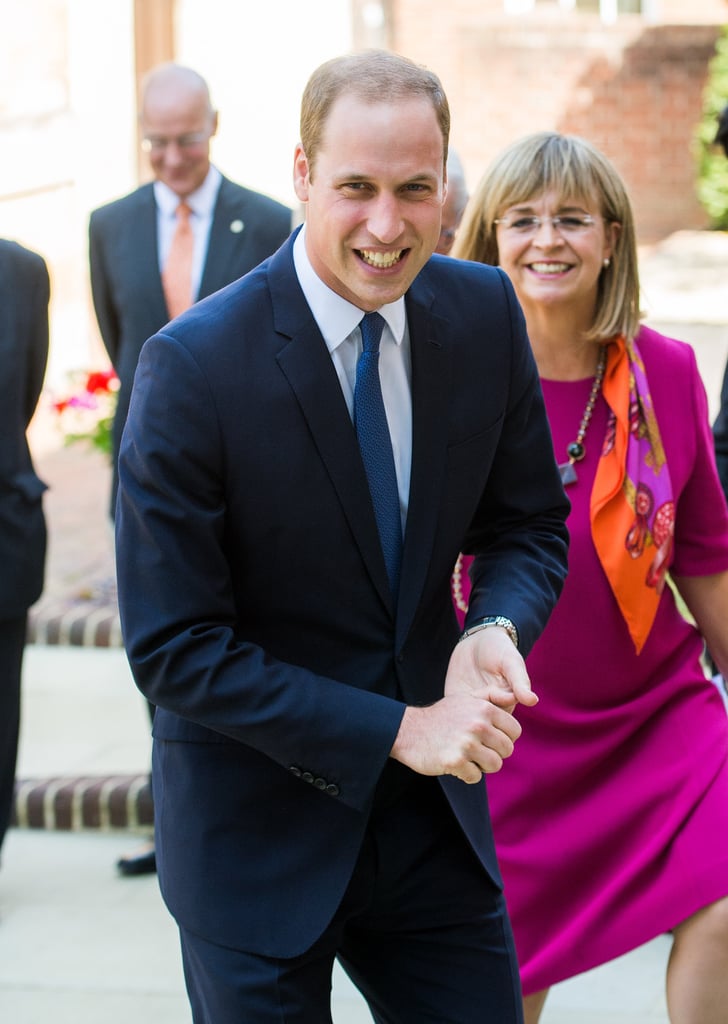 Prince William was greeted by throngs of well-wishers when he arrived in Oxford, England, on Monday for a royal visit shortly after announcing that he and his wife, Kate Middleton, are expecting their second child. The Duke of Cambridge was supposed to be attending Monday's event — which involves opening a China Centre Building — with the Duchess of Cambridge, but she had to pull out at the last minute due to her severe morning sickness. Royal fans will remember that Kate suffered from debilitating morning sickness, or Hyperemesis Gravidarum, during her last pregnancy with Prince George. However, unlike with George, Kate is currently not seeking treatment at a hospital and will instead be treated by doctors at her home in Kensington Palace. This event marks William's first official engagement since returning back from holiday with Kate. (The royals tend to take a break from royal duties during the month of August for a Summer vacation.)

After he stopped inside the Centre, William stopped to chat with reporters for a rare interview. When asked about Kate's health, he said, "She's feeling OK. It's been a tricky few days, or week or so, but obviously we're immensely thrilled." He added: "It's still early days but I'm just hoping that things settle down and she feels a bit better. But it's important that we all focus on the big news and the big international and domestic things that are going on. That's where my thoughts are at the moment." Prince Harry, who was busy with an event of his own on Monday for his Invictus Games, also mentioned Kate's health, saying that he hopes she gets better soon and that she was "feeling poorly" the last time he saw her. Harry did manage to get in a few jokes on Wills, saying, "I can't wait to see my brother suffer more. If it's a girl, he'll suffer even more. I'd love to see him try and cope with that."

As if preparing for another baby wasn't a big challenge already, the royal couple also has many things on the horizon. Kate was slated to make her first solo overseas trip later this month with a short visit to Malta, although the Palace says that the trip might be cancelled if her illness continues. The pair has also been spending quite a bit of time working on their new home in Norfolk, England, which is expected to be completed later this year. Both William and Kate were spotted arriving back from a trip to Norfolk in late August. The new home is expected to be their official home base, as William has signed on for a new job as an air ambulance pilot in Norwich, England.