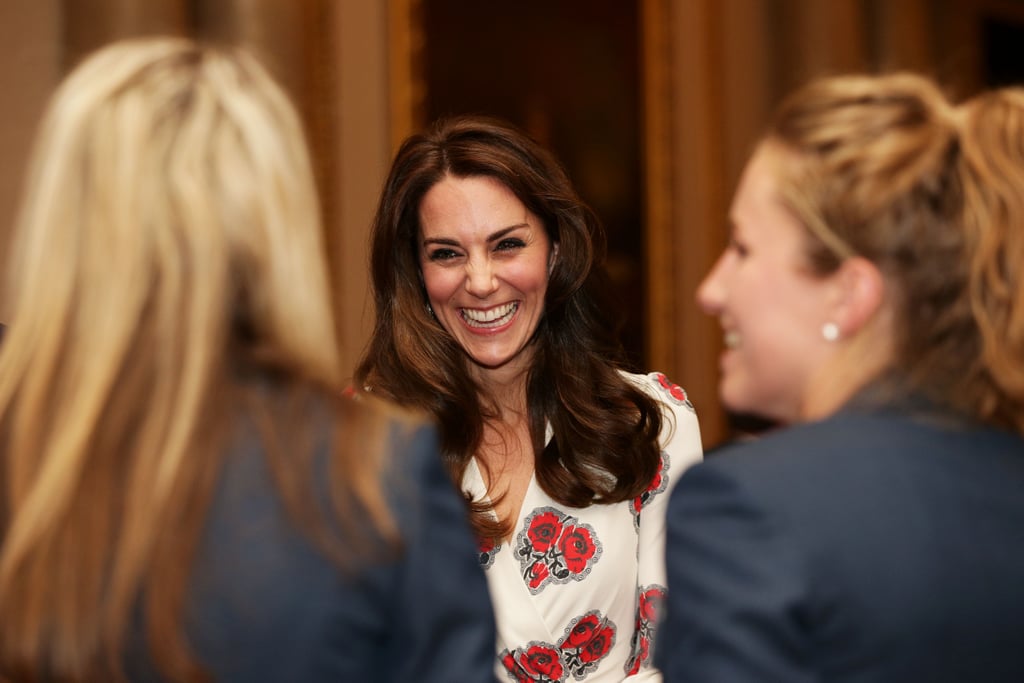 Prince William, Kate Middleton, and Prince Harry continued their busy month by attending a reception welcoming Team GB's Olympic and Paralympic athletes at Buckingham Palace on Tuesday evening. The trio, along with Queen Elizabeth II and Prince Philip, met with several of the medallists and congratulated them on their success at the Rio Summer Olympics this year. During a conversation with triple gold medallist Natasha Baker, Kate — who stunned in a floral-print Alexander McQueen dress — revealed that Prince George likes fencing, saying, "George is fascinated by fencing, but I think that's because of the face shields." She also spoke about Princess Charlotte's love for horses (yes, just like her grandmother), and joked, "Charlotte would have loved to be here, but she'd be running riot!"

Meanwhile, Prince Harry was his usual charming self and fulfilled Olympic swimmer Ellie Simmonds's dream by giving her a hug. She gushed to People, "It was the first time I'd met Harry and he gave me a hug. I must have mentioned to someone I was really looking forward to meeting him and he just hugged me!" If only we were so lucky.

The Bachelorette
Rachel Lindsay Just Returned to The Bachelorette — Do You Remember How Her Season Ended?
by Amanda Prahl 4 weeks ago
Latest Celebrity
×