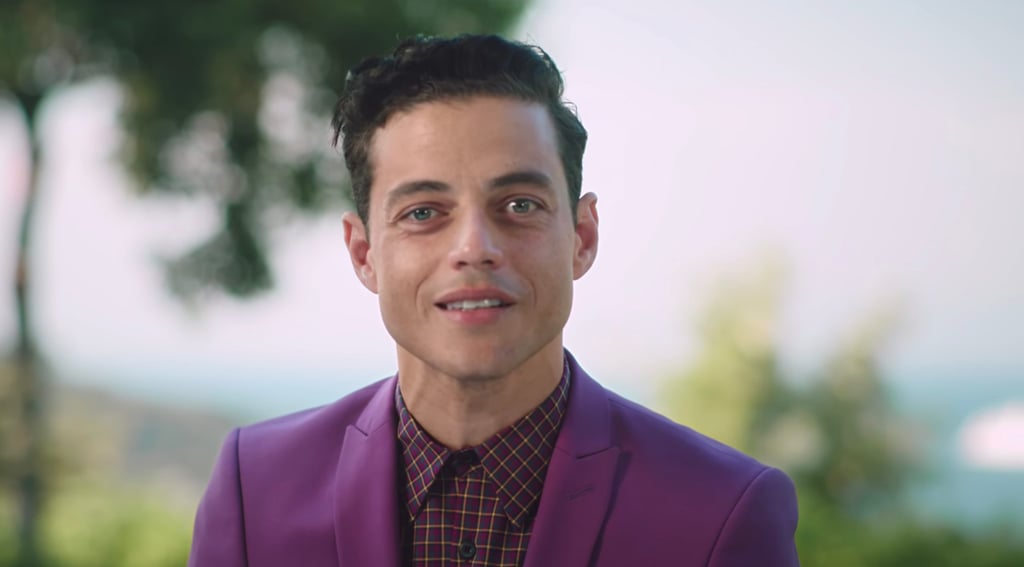 Coming off a successful awards season, Rami Malek has found himself in the midst of a video meme storm. A January clip of the 37-year-old Oscar winner collaborating with hotel brand Mandarin Oriental has resurfaced due to its rather creepy aura. In the promotion, Rami runs down a list of things he's a fan of — in reference to the hotel chain's logo of an actual fan. But his pauses, eerily calm tone, and lack of blinking as he gazes into the camera have some people on edge.

Naturally, Twitter users had a ball with thinking of captions that hilariously described the video. "I feel like the camera should be panning out revealing a very heinous crime Rami Malek has just committed," one user wrote. Others found Rami to be rather relatable, writing things like, "Me on a first date" and "When you're in a job interview and they ask about your leadership but you misheard the question." Some even believe that this proves Rami would make the perfect villain in the upcoming James Bond movie — and it looks like he actually might be joining the cast.

The Bohemian Rhapsody star has recently had a handful of awkward moments. In January, he experienced a cringe-worthy interaction — or a lack thereof — with Nicole Kidman at the Golden Globes, which he later cleared up. He also had a mildly uncomfortable conversation with former co-star Francia Raisa, in which he totally forgot that they worked together. So, personally, I feel for the guy (although the old meme of him holding two pens and looking overwhelmed STILL gets me). But it seems like Rami has a great sense of humour, so hopefully this gives him a good laugh.

TV
Love Is Blind: We've All Fallen in Love With Lauren and Cameron's Journey, and Here's Why
by Mekishana Pierre 05/3
Latest Celebrity
×