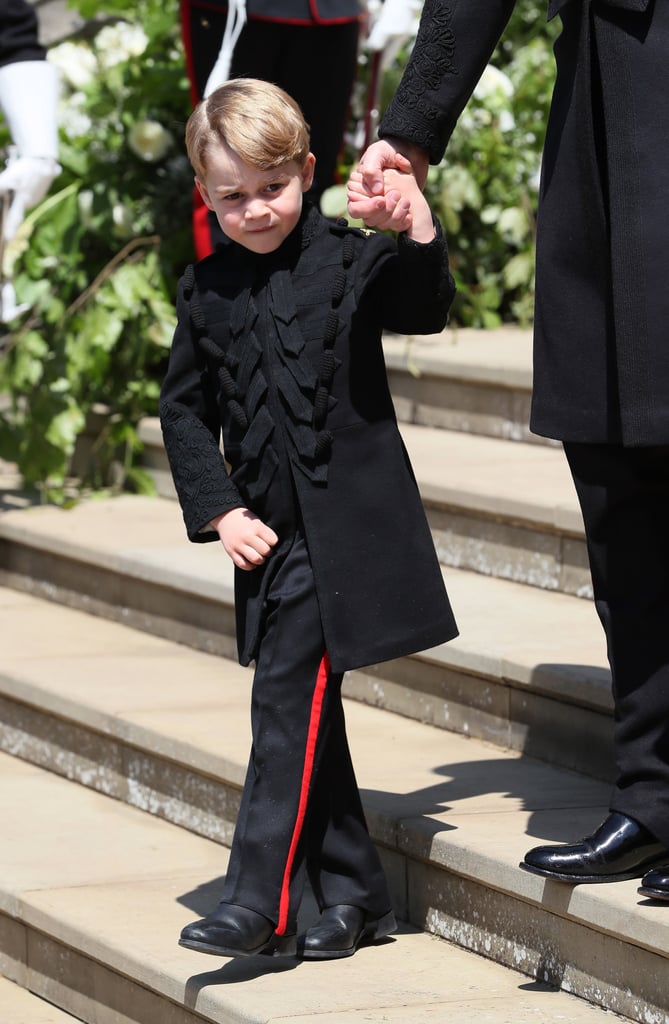 Prince George Broke a Royal Rule by Wearing Pants, and Everyone on Twitter Lost Their Minds!

He's only 4 years old, yet Prince George's fashion choices have been more predictable than any other royal . . . until this past weekend at Prince Harry and Meghan Markle's wedding. For the nuptials of his uncle and new gorgeous aunt, the young royal was seen wearing long pants in public for the first time ever. Yes, first time ever. It's one of the royal family's most adhered-to fashion rules — young boys dress in shorts as a symbol of class — but the wedding was an obvious exception.

"The third in line to the throne's outfit on Saturday was a 'junior' version of the frockcoat uniforms of the groom and Prince William, so naturally the boys were in long trousers with the band of red braid down each leg," etiquette expert William Hanson told Harper's Bazaar. "Amongst the aristocracy and upper middle classes in Britain, young boys are almost always dressed — by their mothers — in shorts until roughly the age of 7. Trousers on young boys is considered a tad 'suburban.'"

Meghan's Clare Waight Keller for Givenchy dress was spectacular, Prince William and Prince Harry looked fabulous in matching uniforms, even the adorable bridesmaids were dressed to the nines, but Prince George's trouser debut had Twitter going wild. Read on to see some of the best reactions to the young royal wearing pants in public, and savour the moment, because we probably won't see him wearing another long look like this for a few years.

Related:
Bask in the Adorableness of All the Kids at the Royal Wedding
Previous Next Start Slideshow
Join the conversation
WeddingThe RoyalsRoyal Wedding 2018The British RoyalsPrince GeorgeCelebrity WeddingsRoyal Wedding
More from POPSUGAR
From Our Partners
Related Posts