Sterling Cooper Draper Pryce is plummeting in a downward spiral on this week's Mad Men, and even though there isn't any carnage to be had (yet), the vultures are already circling. When Ken Cosgrove attends a dinner with his fiancee, Cynthia (it's Alex Mack!), he learns through a guy at rival agency BBDO that Lucky Strike has abandoned the Sterling Cooper ship. As a result, the entire staff comes together for a call to arms. Roger does his best fake surprise over the news, Don rallies the troops with a motivational speech, and the partners set their sights on new clients. Can the company be saved? 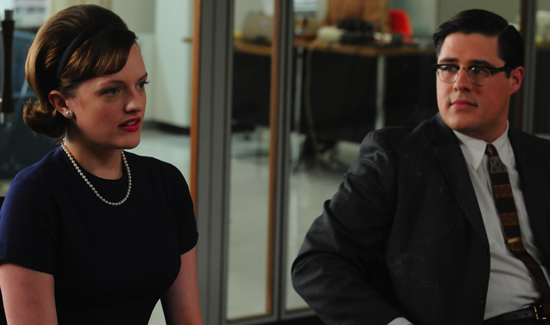 But it's not just all work. Peggy takes it to the sheets with one of her previous suitors, and it's time to break out the cigars for Pete: he's a proud new papa. Let's get down to the nitty-gritty of the night when you keep reading.

What did you think of this episode? Do you think Peggy's new beau will stick around? And am I the only one who kind of missed Sally this week? Sound off below!